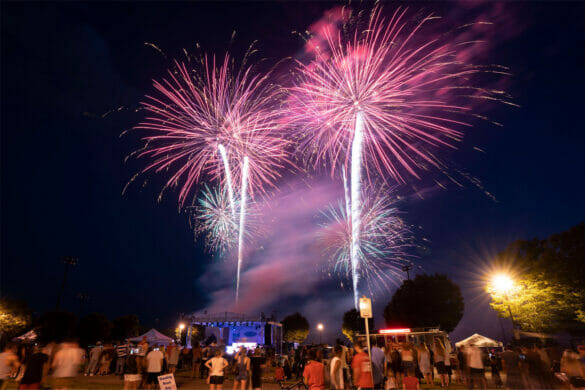 While fireworks are a fun, exciting part of celebrating Independence Day, they can cause serious injuries.

That’s why the Hilliard Division of Police and Norwich Township Fire Department are teaming up to encourage residents to make it a holiday — not a hazard.

State law prohibits the use of fireworks with the exception of those designated as “trick and novelty,” which smoke, pop, and/or sparkle. Legal fireworks should only be used outside, at least 25 feet from any combustible surface, and in the presence of a responsible adult.

The only safe way to view fireworks is to attend a professional show, said Chief of Police Robert Fisher. With many professional firework shows being canceled this year due to Covid-19, it is important to know that fireworks are not safe in the hands of consumers.

“We’re asking everybody to show some respect for their neighbors,” said Chief Fisher. “Fireworks aren’t safe for everyone to handle.”

Fireworks caused five non-occupational fireworks-related deaths during 2018, according to the Consumer Products Safety Commission’s most recent report. Additionally, fireworks were involved in about 9,100 injuries treated in U.S. hospital emergency departments during the year. About 44 percent of those injuries were burns.

About 19,500 fires started by fireworks were reported to local fire departments in the U.S. during the year. These fires caused five deaths, 46 injuries, and $105 million in direct property damage.

“Fireworks are explosives and are regulated for a reason,” said Fire Chief Jeff Warren. “Make sure your Independence Day is memorable for the right reasons. Celebrate safely!”

The City of Hilliard is offering new, fun events for this year’s Independence Day celebration, including neighborhood parades, art competitions, and the singing of the National Anthem by a special Hilliard resident. Learn more here.