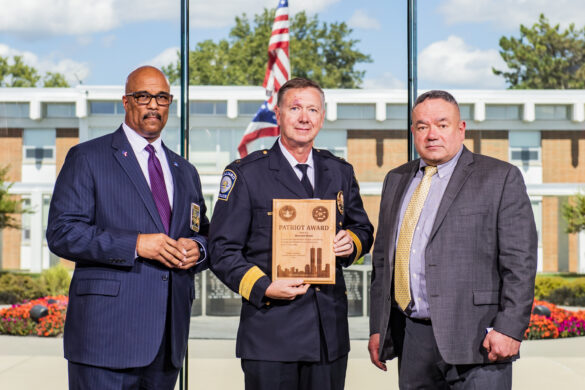 A City of Hilliard Division of Police leader was recently honored with the Patriot Award from the Transportation Security Administration.

Deputy Chief of Police Ron Clark was one of 31 military, law enforcement, security, and emergency service servants from across Ohio recognized for contributions to the security of the United States and the State of Ohio.

Deputy Chief Clark has been a member of the Hilliard Division of Police for more than 30 years, serving in a variety of roles.

He joined the Division as an auxiliary officer in 1991 and was hired as a full-time police officer in 1994. He was promoted to sergeant in 2002 and to lieutenant in 2013. Chief Michael Woods appointed Clark as Deputy Chief of Police in July 2022.

He is a graduate of the American Military University and the Federal Bureau of Investigation (FBI) National Academy. He is also a veteran of the United States Army Reserves.

In addition to recognizing individual efforts, the Patriot Award Ceremony commemorates 9/11, said Director Barker. TSA was established after the terrorist attacks to oversee security in all modes of transportation, but at the forefront aviation security.

“In the aftermath of the violent terror attacks that took place on Sept. 11, 2001, bound by our shared grief, the nation relied on our values of unity, hope, and resilience to not only survive, but heal,” Director Barker said. “These values remain as important today as ever. We commemorate this unforgettable day in our nation’s history by honoring heroes such as Deputy Chief Clark.”