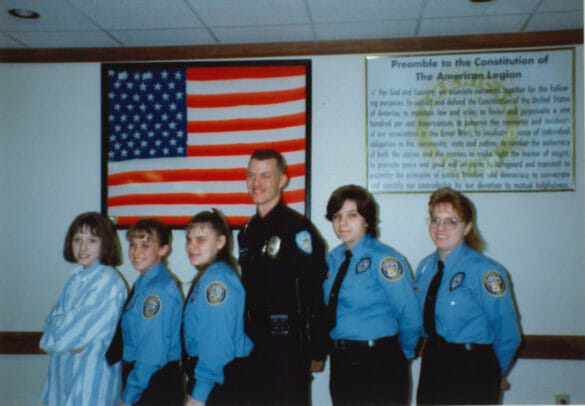 Sixteen-year-old Suzanne Young heard the announcement on the high school intercom promoting a law enforcement program for teens, and something in her sparked.

It was 1990, and the Hilliard High School sophomore hadn’t determined what her career path would be, outside of her after-school gig flipping burgers at McDonald’s.

She picked up a flyer at the school office for Law Enforcement Exploring, a program being offered for teens by Hilliard police.

And even though her dad “grilled the Explorer advisor like a cheese sandwich” at the informational meeting, her path
was set.

“My parents thought it was a phase. That’s always been our joke,” said Muraco, who has now served with Hilliard Division of Police for 24 years in various roles, including as an auxiliary officer, patrol officer, training officer, and detective sergeant.

“I remember getting our uniforms, and I thought it was the coolest thing ever — those polyester pants and patches that said Hilliard Police Explorers,” she remembered. “But I was so proud.”

Muraco credits her experience with HPD’s Explorer Post 2286 with leading her into a career she remains passionate about decades later. And although some of the practices have evolved, the program continues to produce future law enforcement officers.

Exploring is a worksite-based program of Learning for Life, a subsidiary of the Boy Scouts of America. It’s open to males and females ages 14 through 20 who have completed the eighth grade.

The goal at the Hilliard Division of Police is to aid young men and women who feel they are interested in police work, said Officer Mike Deaton, who has served as an advisor since 2000. But it also serves as a “character-builder.”

“It helps teens get hands-on experience before making the commitment,” said Deaton. “They may not become a cop, and that’s OK. We’d rather them find out now if it’s what they really want to do.”

The post meets twice each month (second and fourth Thursday) during the school year, from 6:30 to 8 p.m. at the Safety Services Building, 5171 Northwest Parkway. Members of the Hilliard Explorer Post are also allowed to ride along with patrol officers after their probationary period has been completed.

During meetings, Explorers focus on different types of police work, such as report writing, building searches, self-defense, and much more. HPD also brings in guest speakers from other avenues of law enforcement, such as Secret Service, FBI, ICE, etc., to talk to the Explorers about potential careers.

Hilliard police is currently accepting new Explorers. Those interested in more information about the program should contact Officer Deaton at mdeaton@hilliardohio.gov.

Although many Hilliard Explorers have gone on to careers in law enforcement, Muraco was once the only one who chose to join HPD. That changed in 2019 when Hilliard Explorer Luke White took the oath of office to serve as a Hilliard police officer.

“I went up to Luke on the day he was sworn in and introduced myself,” said Muraco. “I told him I was passing the torch.”