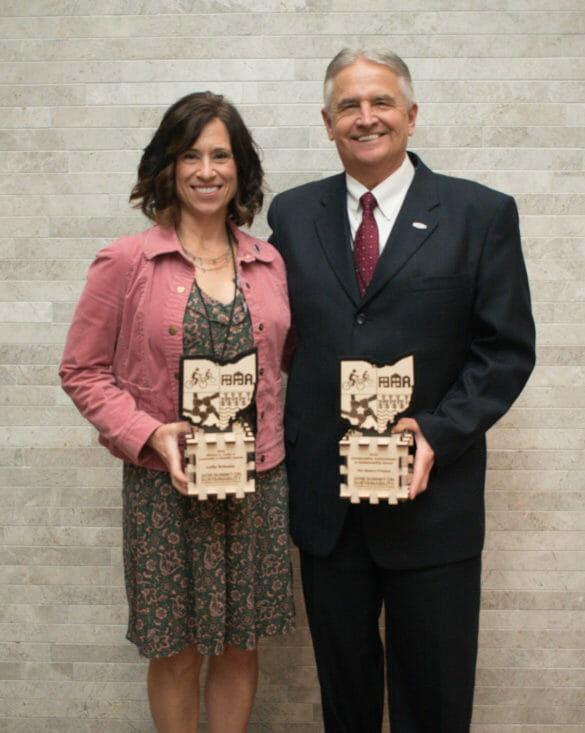 The Mid-Ohio Regional Planning Commission’s (MORPC’s) 2018 Summit on Sustainability featured a variety of educational sessions on planning for an equitable region in the areas of Public Policy, Energy, Environment, Sustainability and Air Quality. As a part of the summit, various public servants and communities were recognized for their achievements.

Letty Schamp, Deputy City Engineer, is the recipient of the William A. Lewis, Jr. Leadership in Mobility Award.

“Letty is a tireless advocate for pedestrian, bike, and roadway safety. She was one of the first engineers to install bike lanes along our roadways after seeing the impact of good bike facilities during an FHWA-sponsored trip to Chicago. Schamp championed Hilliard’s local Complete Streets ordinance, has been actively involved in roundabout safety education, safe routes to school projects and improvements to pedestrian and bicycle laws. An active member of the Central Ohio Greenways board, she also serves on COTA’s Board of Trustees. In 2016, Business First featured Schamp in “People to Know” where she shared her passion for providing more mobility options, while maintaining existing roads, bridges, and trails.”

Columbus and Franklin County Metro Parks, Wagenbrenner Development, City of Columbus, City of Hilliard, and City of Upper Arlington – The Quarry Project were presented the Collaborative Achievement in Sustainability Award.

The Collaborative Achievement in Sustainability Award recognizes a group of entities or individuals who have shown effectiveness in producing environmental accomplishments through a collaborative effort. Columbus and Franklin County Metro Parks is partnering with Wagenbrenner Development, the City of Columbus, the City of Upper Arlington, and the City of Hilliard to create the 20th metro park only 5 miles outside downtown Columbus, making it one of only 2 urban metro parks. The sprawling limestone quarry in west Columbus will be turned into a scenic parkland surrounded by mixed-use development. In Project QT, as it’s being called, a portion of the 607-acre quarry along the Scioto River will be turned into a regional destination for outdoor enthusiasts.

The first phase of public parkland will encompass 62 acres of unused quarry northeast of Trabue and Dublin roads, west of the City of Upper Arlington. An additional 79 acres fronting the Scioto River and Trabue Road, wrapping the park’s east and south sides, will be developed by Wagenbrenner Development for mixed-use. A second phase will create 138 acres of additional parkland to the north. Additional phases are expected to incorporate private mixed-use development spanning two miles along the riverfront.

The adventure park will preserve and restore over 60 acres of open space, offering a place of respite, typical outdoor recreation amenities, and adventure challenge elements to meet the diverse needs of the region’s expanding population. The park will offer hiking, biking, picnicking, fishing, and other traditional activities associated with the park system along with more adventurous challenges, such as rock climbing and paddle boarding. The park also helps to fill a critical link in the Central Ohio Greenways network along the Scioto River to connect Downtown Columbus to Hilliard and on to Plain City.