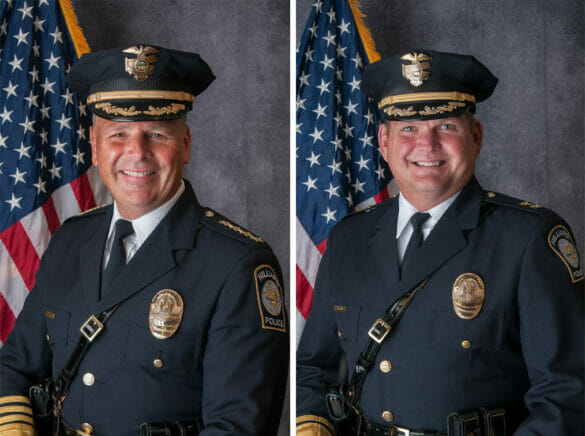 Hilliard to Host Chief Fisher Retirement Reception May 21, Chief Eric Grile to be Sworn in May 24

Posted May 13, 2021 in Police by Andrea Litchfield

The Hilliard community is invited to attend two upcoming events as the Division of Police celebrates the career of Chief of Police Robert Fisher and welcomes incoming Chief Eric Grile.

The City of Hilliard will hold a retirement reception for Chief Fisher Friday, May 21, from 1 to 3 p.m. at the Safety Services Building, 5171 Northwest Parkway, Hilliard. Presentations will take place at 2:30 p.m. followed by an Honor Guard presentation.

All are invited to attend the outdoor celebration, which recognizes Chief Fisher’s 31 years of public service.

“I’m proud to have had the opportunity to wear the badge,” said Fisher, who was promoted to Chief of Police in 2015. “I’m proud of the people here and the things that our team continues to accomplish. As a team, we’ve achieved a lot, and we’ve grown tremendously during the eight years since I came here. Thanks to that same team, I know the organization is going to continue to grow and do great things.”

Deputy Chief Eric Grile will be promoted to Chief on Monday, May 24, at 2 p.m. The public is also invited to attend the event, which will be held in the same location.

“Chief Fisher has been a credit to law enforcement and to the City of Hilliard,” City Manager Michelle Crandall said. “By prioritizing relationships inside his department, with members of the community, and with his peers in other organizations around Ohio, he has helped make Hilliard Division of Police a highly regarded agency that others strive to emulate.”

Fisher said retirement was a difficult choice to make after a career of 30 years working in public safety. Although he is still considering his future options, leaving Hilliard will be bittersweet.

“I originally got into law enforcement because I wanted to catch bad guys and help people out,” he said. “As I’ve grown in my role, the responsibility has changed, and my focus has changed. It’s important to realize that relationship building is the key to being successful in any position in law enforcement.”

Chief Fisher said he feels proud of the progress he and the division have achieved.

“We have become recognized across Ohio as one of the premier law enforcement organizations,” he said. “Our team has really set an example of what a community policing organization should be doing. I’m proud of what each man and woman serving in this division have helped accomplish. I’ll be leaving behind a great team that’s going to continue doing the things we’re doing even better.”

Chief Fisher came to the City of Hilliard in 2012 as Deputy Chief of Police, serving in that role until 2015 when he was promoted to Chief of Police.

He also served as Petty Officer in the U.S. Coast Guard from 2001 to 2009, including serving with the U.S. Navy performing port security operations during Operation Iraqi Freedom.

Chief Grile has served the Hilliard Division of Police since 2016. He was previously employed with the City of Beavercreek, Ohio where he was the Captain of the Investigations Division.  During his tenure in Beavercreek, he has served as a police officer, detective, supervisor over various functions, and as an investigator in the regional drug task force.

He has also coordinated the agency’s accreditation program which, through his leadership, allowed Beavercreek Police to be awarded the designation of Accreditation with Excellence.

Deputy Chief Grile is a graduate of the Ohio Association of Chiefs of Police Certified Law Enforcement Executive Program (CLEE), the Police Executive Leadership College, and the John Glenn School of Public Affairs Public Safety Leadership Academy. He holds a Bachelor of Science degree from Wright State University in management.  Deputy Chief Grile was raised in a public safety family as his father, grandfather, uncles, and brother have all served as firefighters.  He has a unique tie to the Hilliard community as his brother, Chris, serves as Battalion Chief of the Norwich Township Fire Department.