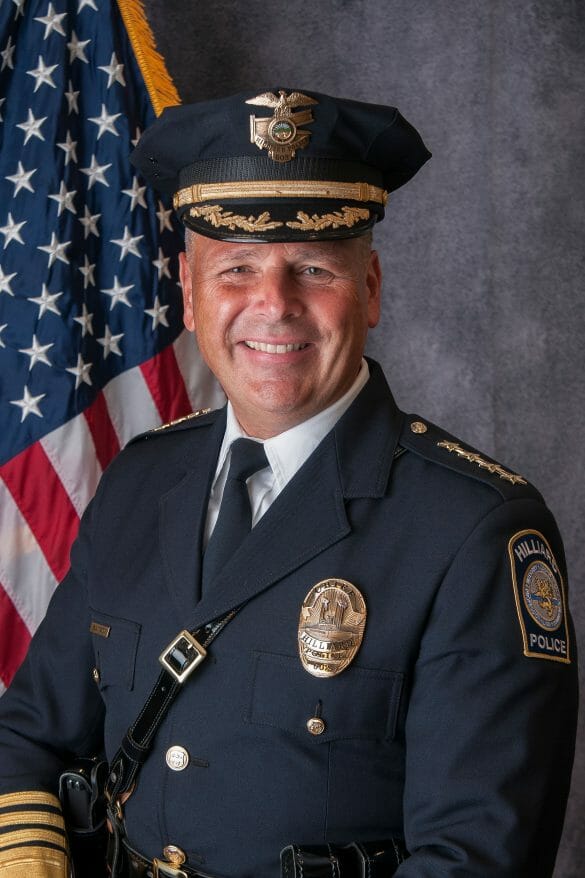 Despite being immersed in life as a police officer, husband, and father of two young children, 30-year-old Robert Fisher could never get the idea of serving his country out of his head.

As a high schooler in Alabama, the current Hilliard police chief had a plan: he would fly fighter planes with the U.S. Navy or U.S. Air Force.

It was the era of “Top Gun,” and the teen already felt a great sense of patriotism. Fisher had earned an ROTC scholarship to help fuel his passion.

But his plan was dislodged when he was turned down for fighter pilot training due to the ear surgery he underwent at age 14.

“I put the dream aside and thought, ‘If I can’t fly fighter planes, I don’t want to do it,’” he said. “As time went on it was one of those things I regretted. I really felt I should serve my country.”

Life led him to Ohio. And instead of a job in the military, he chose another career of service and became a police officer in Sharonville, a Cincinnati suburb. Throughout his 20s, Fisher was promoted to a police sergeant, married his wife, Regina, and welcomed a son and a daughter.

As part of his duties with Sharonville police, Fisher started the agency’s honor guard and toured Washington, D.C. It sparked a renewed sense of patriotism he could no longer ignore, and in 2001, at age 30, he reached out to the U.S. Marine Corp. to inquire about enlisting.

“The recruiter said, ‘I don’t know, you’re 30 years old — that’s pretty old for boot camp,’ but I knew I could do it physically,” Fisher recalled.

He was ready to sign off on the paperwork to serve as a military police officer when his boss, a chief petty officer in the U.S. Coast Guard, approached him about joining “The Coasties” instead.

“He knew I loved being on the water,” Fisher said. “So, I talked to the recruiter and they had a program that was the perfect fit for me.”

He enlisted just weeks before Sept. 11, 2001. The terrorism attack invigorated him even more as he endured boot camp in October and November of that year.

At 33 years old, Fisher was among tens of thousands of boots on the ground when he was deployed to Operation Iraqi Freedom in the summer of 2003. He was stationed in Kuwait, near the Iraq border, for six months.

At the time, his son was 6 years old and his daughter was 4 years old. Back home, his family adopted a dog they named “Coastie” to provide a sense of comfort while their father was away.

Fisher recalls the experience as “very rewarding,” albeit hot. Temperatures reached 140 degrees — pretty warm even for an Alabama boy.

Following his deployment, Fisher was sent to Bay St. Louis, Mississippi, for three weeks in 2005 as part of a search and rescue effort for Hurricane Katrina. The unit provided food and water and answered calls for assistance in the region where the eye of the storm had delivered widespread damage.

One of the most meaningful moments of his military career came during that deployment. Open stores were a rarity in the region, so Fisher was pleased to discover an open Wal-Mart. It was there a grateful resident insisted upon buying a grocery cart full of his food and toiletries for him and his fellow Coasties.

“She wanted to thank us for being there,” he tearfully recalled. “It still amazes me the devastation a hurricane can do.”

Fisher finished his military career in 2009 at age 38, spending the last few years in the Guard’s Marine Safety Detachment office in Cincinnati. At the time, he had been promoted to police lieutenant, then Deputy City Manager in Sharonville.

These days he fulfills “the need for speed” by leading the Hilliard Division of Police and supporting HPD officers who are active military members. His son, Noah, is also a corpsman with the U.S. Navy.

Fisher’s service to his country will be recognized this year. He has been named the grand marshal of the 2019 Hilliard Veterans Day Parade.

“It’s humbling to be asked, but there are many others who have sacrificed more than me,” he said. But sometimes a passion will never get out of your head. “I’d still love to fly fighter planes,” Fisher said.