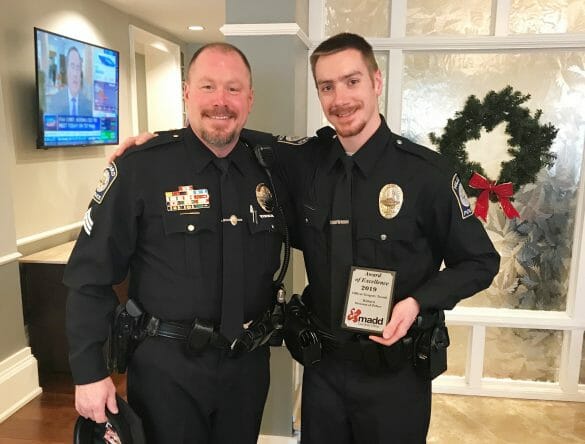 A Hilliard police officer was recognized by Mothers Against Drunk Driving (MADD) on Thursday for his outstanding efforts to remove impaired drivers from roadways.

Officer Gregory Toczek received the Award of Excellence during the MADD Central Ohio Honoring Our Heroes Law Enforcement Recognition Luncheon. The event is designed to honor the most outstanding law enforcement officers, criminal justice professionals and citizens of central Ohio for their dedication in the fight against drunk and drugged driving.

Toczek, who joined the Hilliard Division of Police in December 2017, leads the agency in OVI arrests. He was nominated for the award by his supervisor, Sergeant Josh Cohill.

Hilliard Chief of Police Robert Fisher said he is proud to have Officer Toczek recognized for his efforts in keeping the Hilliard community safe.

“One death or injury caused by impaired driving is one too many. This is one crime that is 100 percent preventable,” said Chief Fisher. “We encourage residents to make safe choices this holiday season by planning ahead when celebrations include alcohol.”

The mission of MADD is to end drunk driving, help fight drugged driving, support the victims of these violent crimes, and prevent underage drinking. Started in 1980, it was a small, unassuming kitchen table where one mom started a movement that would significantly change the course of history in the United States.

“The individuals being honored have truly made a positive impact in the communities in which we work and live,” said Rachel Babich, MADD’s program director of Ohio. “You lead the way in a combined effort to stop impaired driving and save lives.”