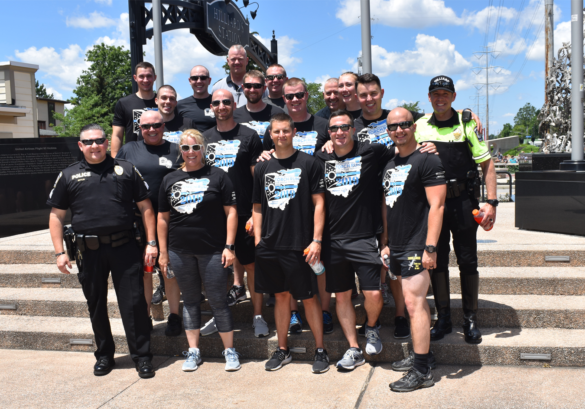 The Flame of Hope made its way through Old Hilliard on Tuesday as members of the Hilliard Division of Police joined athletes for the 33rd Annual Law Enforcement Torch Run for Special Olympics.

The Hilliard leg of the race is among several that take place throughout the state. Officers join together to bike, run and walk across Ohio, carrying the torch into Columbus to ignite the ceremonial cauldron.

The Torch Run involves more than 2,000 police officers from 150 communities, as the torch is escorted down six main arteries throughout the state.

In Hilliard, runners started on Cemetery Road and made their way down Norwich and Main streets before finishing at First Responders Park, where representatives from Safelite AutoGlass were on hand to provide lunch.

One by one, officers took turns running with the torch, raising awareness and money along the way while onlookers cheered them on.

The Hilliard Division of Police team raised nearly $2,000, ranking as the fourth in the state. Officer Brandon Long and Hilliard Citizens Police Academy Alumni member Kelly Lamb each raised more than $500 and were among the top 10 fundraisers in the state. The torch will continue on and finish its journey in Columbus on Friday, June 28, to kick off the opening ceremonies for the 2019 Special Olympics Summer Games.