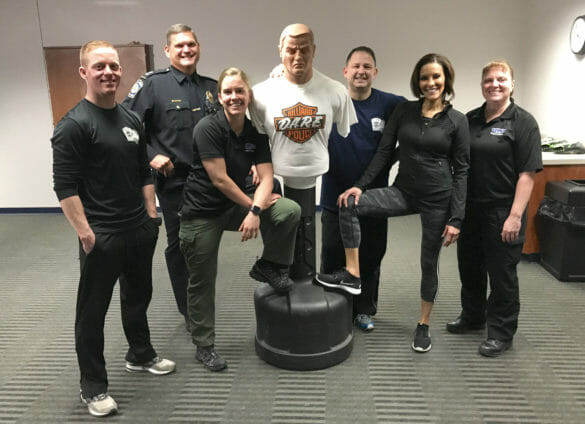 Dozens of women learned new skills and a new state of mind from Hilliard police officers as part of the agency’s Women’s Self Defense class offered this month.

More than 25 women recently graduated from the course, which focuses on prevention strategies with self-defense options that can be used as a last resort if you were attacked.

The Hilliard Division of Police has been hosting the free, two-day class for 12 years, and hundreds of women have learned the techniques.

Sgt. Suzanne Muraco, one of the class instructors who developed the program, said the class aims to empower women to protect themselves even before a situation turns dangerous.

“The number one thing we want to tell women is that their body cannot go where their mind has not been,” she said. “We want them to think about how they would react in some scenarios, and there is no safer place to learn and practice than with us.”

Women are taught to pay attention to their surroundings, be assertive and vigilant, and follow their gut instinct to say no — even if it means appearing “rude.”

Participants also learned a variety of physical moves, including kicks, elbow jabs and techniques to wiggle from an attacker’s grasp.

This week, one of the participants was Yolanda Harris, an anchor with 10TV news. The class will be featured on the newscast on Wednesday, Feb. 26 at 11 p.m. The class is open to women ages 15 and up. It is offered four times a year — typically twice in February and twice in August — with the Advanced class taking place in October. Upcoming Basic class dates in 2020 are July 29 and 30, and Aug. 12 and 13, with the Advanced class Oct. 14 and 15. Watch HPD social media and City newsletter for registration opening announcements.