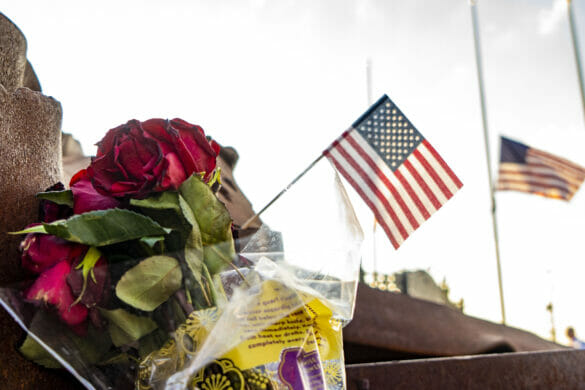 The City of Hilliard has partnered with the Transportation Security Administration (TSA) to host an event commemorating the 20th anniversary of 9/11.

The ceremony will be held on Friday, Sept. 10 at 1 p.m. in the City’s First Responders Park. The event is free and open to the public.

TSA will present the Ohio Federal Security Director’s Patriot Award to 24 military, law enforcement, security and emergency service servants from across Ohio in recognition for their contributions to the security of the United States and the State of Ohio.

“The Transportation Security Administration appreciates the support of the City of Hilliard and the State of Ohio in this important recognition of our military, law enforcement, and first responders,” said Federal Security Director Donald Barker.

“First Responders Park has served as a gathering place for reflection and remembrance for many in the Hilliard community since it opened 10 years ago, and we’re grateful to share this space with federal partners,” said Hilliard Chief of Police Eric Grile. “TSA was created in response to the terrorist attacks on 9/11, so it’s fitting to welcome these public servants who keep our country safe.” Located in the center of Old Hilliard at Center and Main streets, First Responders Park memorializes those who died on 9/11 and pays tribute to the 403 first responders who died making the ultimate sacrifice for their community.

In 2010, a delegation of 20 individuals representing the City of Hilliard, Hilliard Division of Police, Norwich Township Fire Department, and the Hilliard community made the round-trip from Hilliard to New York City to escort home seven tons of steel from the World Trade Center.

The memorial features granite walls inscribed with the names of those who lost their lives, a reflection pool, personalized pavers, a monument honoring fallen officers, and a metal sculpture made from the steel of the World Trade Center.

The ceremony will feature performances by the Shades of Blue a cappella choir from Hilliard Bradley High School and the public safety bag pipe band representing the Norwich and Washington township fire departments.

On Saturday, Sept. 11, First Responders Park will remain open for public reflection. Hilliard police officers and Norwich Township firefighters who were members of the group that traveled to New York to retrieve the items from Ground Zero will be available to serve as park guides from 8 a.m. to 11 a.m.

Additionally, the officers will ring a bell at the times of the terrorist attacks and when the towers fell.