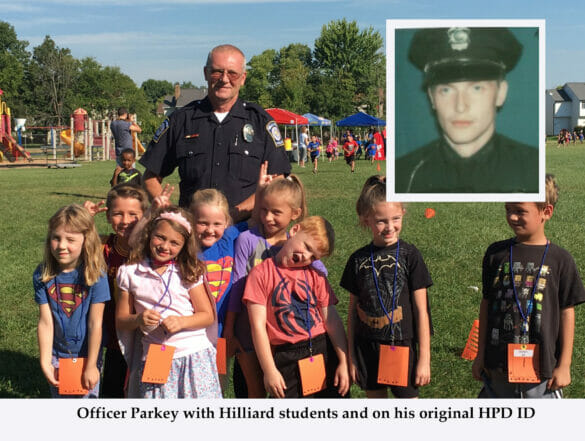 Bob Parkey has a way of turning back time when he walks through the halls of the Hilliard police station.

Even the agency’s most senior leaders, who are technically his supervisors, seem to become young patrol officers again when they hear his baritone voice approaching. They leap from their seats, stand up straight, and wait their turn to shake his hand — being sure to address him as “Lieutenant Parkey” even though he hasn’t served in the position since 2013.

This week he will retire (for the second time, he jokes) from the Hilliard Division of Police after an incredible 40 years of dedicated service — the longest tenure in department history.

“That’s 40 years of challenges and disappointments, but also progress. And I’m so proud of that,” said Parkey, who has served as a reserve officer for the last seven years, primarily as a school safety officer with Hilliard City Schools. “This is more difficult than I like to admit.”

Parkey had been working in security with Lazarus during the 1970s when he was drawn to a career in law enforcement. He attended the Ohio State Highway Patrol Academy and applied to several central Ohio police departments. Hilliard was the first to call, and at the age of 23 he was sworn in as patrolman by former Chief Edgel Maynard in 1980. HPD was a department of seven at the time.

His very first night on the job he responded to a pizza shop where an employee had just been held at gunpoint. It would be the first of many unforgettable scenes that would shape him into what his peers call “a street cop through and through.”

During the next several years he took on new roles, including the department’s field training officer. He trained 14 officers during a departmental boom in the 1980s and 90s. Parkey tried to not only teach rookie officers the ins and outs of the job but instill the same passion he felt.

“You’re not born with a fire in your belly, and you don’t get it when you get sworn in, but if you don’t have it by the end of field training, you’re going to have a mediocre career,” he said.

Training officers helped prepare him for the promotion to sergeant in 1988. A promotion to lieutenant followed in 1993.

Parkey also served as the department’s only traffic crash investigator, which led to one of his legacy projects: the installation of the cable barrier system on I-270. At one point the department was averaging 2.2 fatalities per year due to crossover crashes in Hilliard’s 2.5-mile stretch on the interstate. The lieutenant knew lives could be saved and lobbied for the state to make the investment.

“It was pretty cutting edge at the time,” he recalled. “There were only a few in the state. I had to drive to Cincinnati to see it.” Eventually, he got his way and was featured in Roads & Bridges magazine for the feat.

Other accomplishments include being instrumental in launching Hilliard’s Safety Town program in 1990, creating HPD’s bicycle and K9 units, and overseeing the detective bureau and dispatch center. Still, he believes the basic patrol officer remains the most critical job in the agency.

It’s also the job that can change someone forever, he said, quietly and slowly recounting some of the most horrific scenes: three teens struck and killed by a train, two toddlers lifelessly pulled from their burning home, a double homicide.

He pauses and seems to be back at the scenes.

“The last cry of a crash victim, the screech of tires, the smell of burning flesh — there’s no cure for that. The cumulative total is so difficult to carry,” he said, dragging each word. “It’s a job that needs to be done, but it takes its toll.”

He was just months from retirement when the Sandy Hook Elementary shooting took place, showcasing the vulnerability of large groups of young children. He proposed a new position to enhance the School Resource Officer program but didn’t initially plan to personally be a part of it.

In 2013, after 33 years of service, Parkey retired. But it lasted only a few months. That fall, he stepped into a new role as school safety officer, a position that allowed him to serve as a “reserve officer” with the department under former Chief Doug Francis.

Francis describes Parkey as someone with a “servant’s heart.”

“He lives and breathes HPD,” said Francis, who recounts relying on Parkey during his transition to lead the department into a new era. “Every decision he made was always based on what he felt was best for the agency.”

Reflecting on his career and reputation, the 62-year-old admits he was stubborn at times, and stern many others. The job has a way of hardening and softening a person.

His family knows it all too well — especially his son, who has followed in his father’s footsteps and serves as a police officer himself.

In retirement, Parkey plans to spend time with his wife, children, grandchildren, and a new great-grandchild expected this winter.

It’ll be an adjustment for them all.