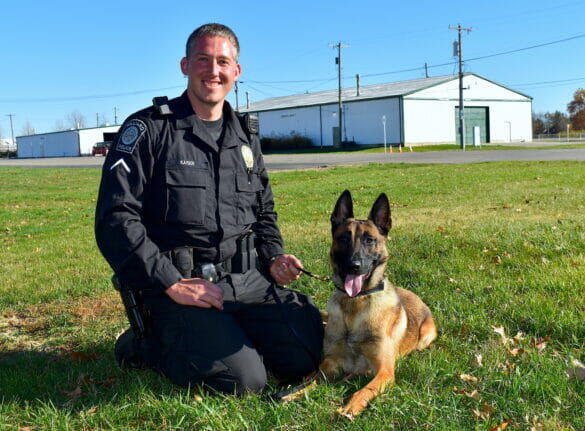 When someone holds a pizza in front of K9 Ari’s nose, he doesn’t just smell pizza.

And he smells the acidic tomato sauce, the oregano, the cardboard box, the person holding it, and every part of the car they were driving.

The dog smells layers of everything, which is among the reasons the 2-year-old Belgian Malinois excels at his job with the Hilliard Division of Police.

K9 Ari has been on the job with HPD since fall 2020. He’s the eighth furry face to join the agency since the K9 program was established in June 2005.

In addition to their keen sense of smell, Belgian Malinois are known for their athletic bodies, focused attention span, and extreme intelligence.

Like all HPD dogs, K9 Ari is considered a “dual purpose” dog, meaning he is trained in criminal apprehension, tracking, article searches, and narcotic detection. For K9 Ari, apprehension is his favorite game of hide and seek, said Officer Dustin Kaiser, Ari’s handler.

K9 Ari was born in France and obeys commands spoken in French. He underwent obedience training there before being flown to Ohio to complete training at Storm Dog Tactical. Once in Ohio, K9 Ari and Kaiser trained together to become a certified team.

It’s been a bittersweet transition for Officer Kaiser, who lost his previous partner, K9 Jawaak, in spring 2020 as a result of a brain tumor.

“Their personalities are 100 percent opposite,” said Kaiser, who has served as a Hilliard police officer since 2013. “Jawaak was calm and methodical— he liked to take his time. Ari is quick. I’ve had to speed up my pace to be able to react with him.”

The handler has learned to adapt his style to suit his new partner, who he describes as “very energetic, friendly, motivated, and playful.”

K9 Ari is settling in at home with his new family, which includes Vinny, a big rescue dog brother. After work each evening, the two spend an hour playing to “wind down.” A K9’s reward is praise from his handler, and Ari loves his blue rubber ball.

The team is one of three currently serving the City of Hilliard. They join K9 Kane and Officer Matt Braden, and K9 Max and Officer Hunter Schweickart.

On average, the K9 unit is used about 200 times per year, mostly for narcotic detection. The unit is often called upon by other law enforcement agencies throughout Ohio for assistance and works closely with Hilliard City Schools in its dedication to keeping the buildings drug-free.