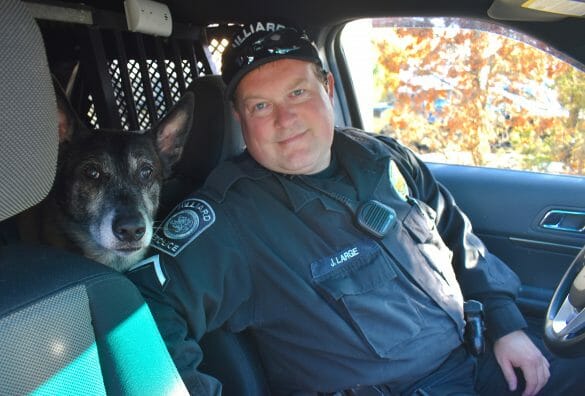 A retirement celebration in his honor will be held at 2:30 p.m. on Thursday, Dec. 12 at the Safety Services Building, 5171 Northwest Parkway, Hilliard. All are welcome.

Ears up and tongue out, the dog peered out the rear window of the police cruiser and watched the city’s familiar scenery pass by.

Hilliard Division of Police Officer Jim Large knew his K9 partner’s position without looking back from the driver’s seat.

The 10-year-old Belgian Malinois has been Officer Large’s K9 partner for eight years. But this particular day will be their last shift together.

K9 Oz is retiring. Officer Large will ceremonially purchase him from the police department for $1, and the dog will live out his retirement in his handler’s home.

In the car, the dog is typically a quiet companion, except for when it’s time to work. When he hears the faint “click” of the cruiser’s cameras turning on — meaning that the cars exterior lights have been activated — he starts to bark, readying himself for action.

Officer Large describes K9 Oz as “intense, high-energy, driven and focused.” Even as a senior dog, K9 Oz still jumps, run and searches as if he’s a puppy — the only physical sign of aging an increasingly grey coat.

Hilliard police dogs are trained to be dual-purpose, meaning K9 Oz is trained in criminal apprehension, tracking, article searches and narcotic detection. But like any officer, he has his expertise.

“His perfect day is searching for drugs,” said Officer Large. “He loves tracking.”

A Belgian Malinois’ nose is 200 times stronger than a human’s nose, and K9 Oz has put his to work throughout his career, assisting Homeland Security, working with HPD’s Special Investigations Unit and searching for missing persons, among other tasks.

A police dog’s reward for tracking scents is praise from his handler and his special toy. For K9 Oz, that’s a piece of fire hose. He goes through one of the “indestructible” hoses every few weeks or so.

K9 Oz’s retirement also marks the end of an era for Officer Large, who is among the most experienced K9 handlers in central Ohio. He has served as a K9 handler for more than 14 years and was the founding handler of HPD’s K9 unit.

“It’s the best job I’ve ever had,” he said. “The dog in the backseat is the best partner.”

His advice for newer handlers is to “listen and watch” to ensure the dog is being placed in the best area for success. He hopes to see the program continue and remain successful as he prepares for his own retirement in a few years.

This isn’t the first time Officer Large has retired a K9. His first dog, Brix — who he describes as a “social butterfly” — retired in 2011. Officer Large expects it will take six months for K9 Oz to settle into his new routine at home, which will likely include a padded bed and some well-deserved Milk-Bones.

“He has really been the best dog,” Officer Large said. “I knew I would get home at the end of my shift because of him.”