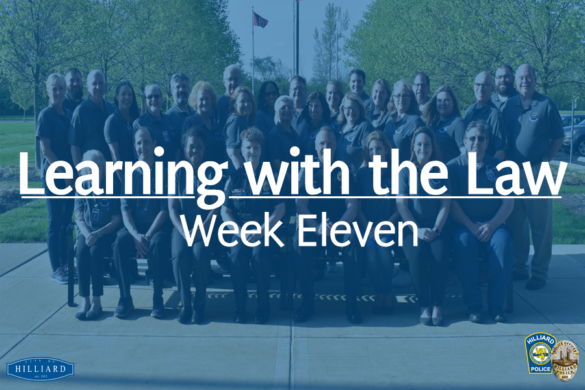 Learning with the Law – Week Eleven

Editor’s note: This is the eleventh in a 14-week series of first-person accounts of the highly popular Hilliard Division of the Police Citizens Police Academy.

Week 11 of the Citizens Police Academy started out with our class photo. If you’ve ever tried to take a large group photo, you know how it goes, so I don’t even think I have to explain that one! We had to line up by height (my favorite, as a shorter person) and had a lot of laughs and natural windblown beauty.

Unfortunately, I had to miss last week’s class, which focused on traffic stops and speed radar. Fortunately, if you miss a class, you can attend that class the following year with the next CPA class. I will definitely be taking advantage of that!

Dinner this week was provided by Rusty Bucket.

This week’s class was about traffic crash investigation. Class started with Sgt. Cohill making a “yaw mark.” It took me most of the class before I realized he wasn’t saying “y’all.”

A yaw mark is the mark that is made by a vehicle when it abruptly turns without any sort of brake. This could happen if someone made a quick turn to avoid hitting something and either was unable to brake or didn’t brake. There is a mathematical formula investigators can use to determine how fast that vehicle was going. The nerd in me got super excited about that! We measured the yaw mark and took the math home for homework.

Whenever there is a crash, there is a lot of work to be done to determine what took place, who is at fault, what violations were made, etc. Our Crash Investigation Team goes to the scene to collect this information on only specific accidents – those that are fatal, serious or possible serious injury, or those that involve public safety vehicles with injuries. Like the Criminal Investigation Unit, these officers get called out no matter what time of the day or night. I am consistently impressed by how much time and dedication our officers give this community.

At the scene of a crash, there are multiple measurements and photos to be taken and data to be collected. It takes a lot of time and attention to detail. Our department has these awesome things called “total stations” that capture distances, images, slopes, etc. of a crash scene. This means the officers don’t have to take all data by hand. When you consider that a freeway crash scene can be up to 2,000 feet long, that makes a lot of sense. A total station is basically a little robot that follows where the officer is based on a pole they have in their hand. It records points when the officer presses a button. There is a lot more science to it, but that’s the easy version.

We talked in detail about the types of crashes, and we saw some examples in videos and photos. One video showed us how important it really is to wear a seatbelt and how it only takes a split second of distracted driving to take a life. Always buckle up and keep your eyes on the road!

One of the most interesting pieces of conversation was about the roundabouts. These intersections are becoming more prevalent and sometimes have a bad reputation, but roundabouts do a lot of work in preventing fatal and serious injury crashes because they force drivers to slow down. T-bone crashes are the most deadly, so traditional intersections pose a much bigger threat to a life. Being educated on how to use roundabouts goes a long way, and when they are used properly they significantly increase the safety of the community.

I have always considered myself a defensive driver, but this night of class really made me reconsider the way I drive. As we become comfortable as drivers, it is easy to run on autopilot, and it opened my eyes to habits I needed to change to be safer.