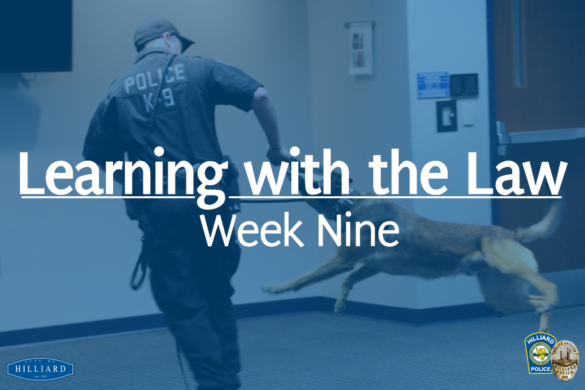 Learning with the Law – Week Nine

Editor’s note: This is the ninth in a 14-week series of first-person accounts of the highly popular Hilliard Division of the Police Citizens Police Academy.

Week nine of the Citizens Police Academy included another visit from the Norwich Township Fire Department and an introduction to the police K9 unit.

Dinner was provided by Skyline Chili (another one of my favorites!)

We talked with firefighters about what a typical day is like and how their shifts work. I learned they all pitch in for lunch and dinner each day they’re working.

They help residents find outside resources for transportation, ordering medication, and sometimes things as simple as helping them plug in a computer. I work with seniors on a daily basis and know they have needs we aren’t necessarily able to provide to them. This program is amazing, and the two firefighters who came in to talk about it are passionate about being a part of the program.

The second portion of class was dedicated to the K9 units. There are three K9s at Hilliard police. We are fortunate because it is not common to have that many at an agency our size.

Police dogs are actual police officers. If a K9 is shot, the perpetrator will be charged as if they had shot a human officer. Being an animal lover, that gives me a little bit of peace. I know how much these guys really do care about their dogs!

Policing isn’t a game to anyone, but the reason K9s are so good at what they do is because it’s fun for them. Every time they perform they get a reward, and they work hard for it. Just as officers work for the reward of keeping the community safe, these dogs do the same thing. They just get a toy at the end.

We watched two different demonstrations of how the dogs do their work, one of which was alerting to narcotics and the other was attacking a suspect that was threatening his handler. It’s really cool because they are so smart, and though it’s something you see in movies it’s totally different when you see it in person.

Police dogs are always trained in two specialties. There are eight different things they can be trained to find. Our dogs are trained in narcotics and patrol. You cannot train a dog on both narcotics and explosives because if they find something in a car, you can’t determine whether that is drugs or a bomb.

K9s can also be trained to find fruit. When you leave the country and return, you can’t bring fruits or vegetables. Often, TSA will have produce-trained dog. They’re also sometimes trained to find bedbugs.

Overall, this week reminded me how lucky Hilliard residents are to have the resources we do. This has been clear to me through the entire class, but these two presentations really showed me the extra mile these first responders go for the community!