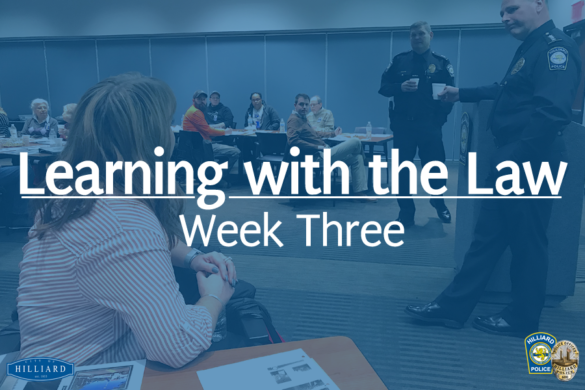 Learning with the Law – Week 3

Editor’s note: This is the third in a 14-week series of first-person accounts of the highly popular Hilliard Division of the Police Citizens Police Academy.

In the third week of CPA, we talked about collecting information in multiple facets and the importance of communication. As always, the class started with food, this time dinner from Fazoli’s, sponsored by Woody’s Towing, and some amazing baked goods provided by a Citizens Police Academy (CPA) alumni member.

For the first half of this class, we heard from Communications Technician Gloria Rose of the Northwest Regional Emergency Communications Center (NRECC), the organization that provides dispatching services for Hilliard police.

I was particularly excited about this night because I have always been very interested in dispatching. My dad has worked as a dispatcher for 15 years, and dispatching was my first career plan. Though I had some knowledge going into this session, it is always fascinating to me how much work goes into being a dispatcher.

Dispatchers undergo substantial training. On average, call-takers have an initial 20-week training program and continue their education throughout their entire career.

When answering a 911 call, the first question a dispatcher asks is, “Where is the location of the emergency?” In the heat of an emergency, people tend to be more concerned about explaining the situation than asking for help to come. We learned the most important factor for first responders is where something is happening: Location, location, location!

If a dispatcher doesn’t know your location, they can’t send someone to you. The sooner they know where you are, the sooner they can get help there. Even if they don’t know the entire situation, they can dispatch first and get information later. It is so very important to be aware of your surroundings. Whenever I drive on the freeway, I constantly take note of what mile markers I pass for this very reason. My friends all think I am crazy, but it seems I’m doing well from the perspective of dispatchers!

We listened to some calls. Admittedly, a few were uncomfortable to hear. It really gave us perspective on how hard a dispatcher’s job is. In people’s most panicked moments, dispatchers and call-takers remain calm.

A cool new feature that was just introduced in Franklin County is Text to 911. If someone is in a situation where they are unable to call 911, they can text and have emergency responders dispatched to their location. She made sure to highlight a phrase they say often: “Call if you can, text if you can’t.”

After the presentation on dispatching, we moved onto another important piece of communication: Reporting. We did a few hands-on (and fun) exercises emphasizing the importance of giving facts and reporting accurately. I was interested to learn that of the 40,000 or so calls for service HPD received last year, only 3,074 of those resulted in reports. Many situations do not require a report to be filed, and any time there is a repeated call relating to an initial report, it is added to the existing report.

When filing a report, it’s important to give clear, chronological and factual information. Reports act as legal documents for insurance, criminal proceedings, etc., and it’s important to get everything right the first time. Ambiguity makes for a tough time when reporting.

We also learned that robbery and burglary are very different things, though people tend to use the terms interchangeably. If a person is robbed, there was a confrontation. If a house was broken into and there was not a confrontation, that is considered a burglary. If something is stolen from a property that people do not directly inhabit, that is a theft.

Random fun fact we learned: Cops are called cops because they used to wear copper stars on their uniforms. Who knew?

An awesome resource HPD provides is online crime mapping. Basically, every time a crime is reported (except for especially heinous incidents) it is tracked so residents can see what is happening in Hilliard. It’s available to the public on the City’s website. This was exciting to me as a resident because I am confident our police are doing their best to keep us in the know.

This week’s lessons reminded me of week one of CPA, when we talked about community policing. If we know what is going on in our community, it makes it easier for us to work together. Communication is key.