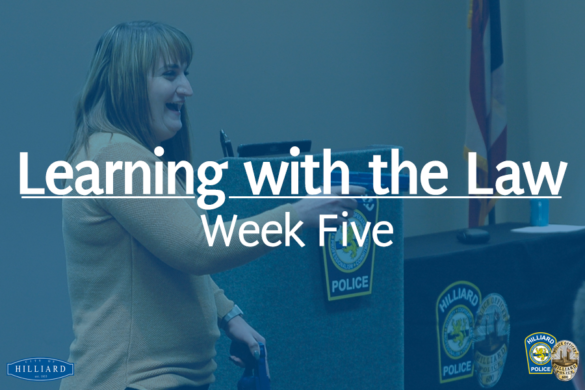 Learning with the Law – Week 5

Editor’s note: This is the fifth in a 14-week series of first-person accounts of the highly popular Hilliard Division of the Police Citizens Police Academy.

In week five of the Citizens Police Academy, we jumped right into response to resistance, also known as use of force, with Officer Tyler Harris and Officer Jeb Pencil. Dinner was provided by Jersey Mike’s.

Use of force can have a negative connotation, but the reality is that officers react based on how offenders act and level of resistance of an offender.

There is no question the job of a police officer is difficult. Officers are faced with tough, dangerous and sensitive situations on a regular basis. I think the hardest part of being faced with such situations is having to make the right judgment call on a moment’s notice.

In police work, there is no time to sit down and think about a situation by tearing it apart piece by piece. Officers process as much information as possible, as quickly as possible, and must act from there. Officers are trained to make the correct choices under pressure for the people they took an oath to protect.

Something I touched on in last week’s blog was body cams. I mentioned that they can help protect officers who have to respond to resistance or use lethal force. With society relying so heavily on technology, it is not uncommon for videos of officers to be in the news and for people to claim they are “abusing their power” and “acting out of line.” The important thing to remember when you see videos like that — or of any situation, for that matter — is that a video only shows one point of view.

We watched the same video in which an officer was forced to use lethal force from two perspectives. The first angle of the video only shows the suspect seemingly walking away and being shot. We watched the same exact moment from a different angle, where you see the suspect has a gun and is pointing it at officers and threatening them. Point of view is inherently important.

We did an awesome activity that gave me a true perspective on this type of decision making. Officer Harris and Officer Pencil asked for a volunteer to act as an officer in a scenario, and I went first.

I was taken out of the classroom while Officer Harris explained the scenario to the class. I worked up some anxiety while waiting. After a few minutes, Officer Harris came out and gave me a small piece of the scenario: what the caller would have reported to dispatch upon calling 911 and what would have been passed on to me as the officer. There was a table to my right with “weapons” for me to choose from. (These were their blue rubber training weapons that cannot actually hurt anyone.) Based on the details, I chose to take a Taser and a gun with me. They said go, and I walked into the situation in front of the class.

Within a few seconds of being on scene, the suspect, played by a CPA alumni volunteer, had shot a victim! I had to fire my weapon to prevent the suspect from shooting me.

I felt overwhelmed and unsure walking into the situation – a feeling that continued afterward. I think I did okay for the circumstances. We talked in-depth about what I could have done to prevent the victim from being shot. It was a good reminder to all of us not to judge an officer in hindsight. It is easy to say what you would have done better or differently when you were not in the moment and under pressure.

Following the presentation on response to resistance, Officer Trevor Gill and Sgt. Josh Cohill taught us about emergency vehicle operation. One of the interesting phrases I learned is that when someone gets in an accident, there are three crashes: One between the cars, one between the vehicle and the bodies inside, and one between your body and the organs inside of you. It gave me a weird, but cool, visual.

We talked about pursuits and discussed HPD’s pursuit policy. Pursuits are most easily explained as chases when a suspect is trying to get away. It is always important for officers to use discretion when choosing to pursue a suspect. They must consider many factors when deciding whether catching the suspect outweighs the danger the pursuit could cause – for both those outside of the situation and the suspect.

Sgt. Cohill put it best when he said, “We took an oath to think of the wellbeing of the violator.” That spoke volumes to me. A lot of people view officers as “out to get them,” when in reality they are considering the well-being of everyone. No officer wants to have to use lethal force, just as no officer wants to endanger a violator.We ended the class by watching a few videos of pursuits that HPD has been involved with, the most recent with Officer Gill. He stopped someone experiencing a medical emergency on I-270 earlier this year. You can watch that video on HPD’s social media accounts, and I would recommend it. In a crazy situation, he remained calm and potentially saved several lives.

Overall, this was an eye-opening class because we got an idea of the immense pressure officers are under to act quickly and correctly. This reminded us why providing accurate and thorough information is important in any call, and even more why working together and giving our support to them is essential.