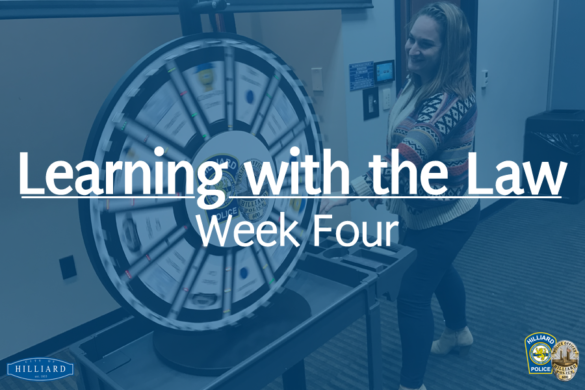 Learning with the Law – Week Four

Editor’s note: This is the fourth in a 14-week series of first-person accounts of the highly popular Hilliard Division of the Police Citizens Police Academy.

This week marked the fourth week of Citizens Police Academy, and this class really was learning with the law. We talked about the legal side of policing, including general laws and case law, with Detective Chad Wood. This week’s dinner was provided by Beef ‘O’ Brady’s.

Detective Wood was one of my favorite presenters, so far. He made what he admitted can be a boring topic into something fun. I am interested in law to begin with, so I wasn’t complaining, but he was great company.

There was a natural discussion with lots of good questions on the topic, which I liked. It may have helped that we were bribed into participating with prizes — specifically little toy pigs and unicorns. Having pigs as a prize may tell you a little bit about Detective Wood’s sense of humor. He said he takes what can be a derogatory term as more of a compliment: Pride, Integrity and Guts.

A new trend in police work is the use of body cameras. I have always viewed body cams as a mostly positive addition to police work because they serve as extra protection for officers when they make difficult decisions and (as we learned last week) photograph evidence.

Something I was interested to learn is that all body cam footage – unless part of an active investigation – is public record as soon as it is captured. This is great for the reasons I listed, but it creates a fine line where it is hard to decide whether to equip officers with them.

For example, if I came home from work one day to my front door open and I was unsure whether I left it open or there was a burglary, I would likely call the police. A body cam will capture everything in the officers’ view as they clear the scene, which often means walking the entire premises of my home. Any of my personal information and belongings that are captured on that camera are now public record for anyone to see.

The other part that people often forget is that officers’ training plays a role in their decision making. They have professional understandings and opinions that I may not, so probable cause has a cornerstone in that case. With this, and investigations in general, he emphasized that it is not what you know, it’s what you can prove.

We talked about the differences between felonies and misdemeanors and the types of arrests that can be made. Officers make arrests on two different bases, with a warrant and without. Felony arrests can be made by anyone (i.e., citizen’s arrest) but misdemeanors must be made by officers. The thought process behind that is that if someone is a serious and dangerous offender, they want them in custody as soon as possible. More minor crimes should be left up to the professionals. Another important aspect of arrest is our rights as citizens. The Fourth and Fifth amendments specifically are what protect citizens from unlawful action.

At the end of class, we reviewed Miranda Rights. Detective Wood asked if anyone could recite them in full. I missed a sentence or so, but I was the only one to speak up so I got a unicorn for that one.

I left this week’s class with a pig and a unicorn and a much better understanding of why officers respond to situations in the ways that they do. I feel like an important piece of this overall course is understanding that officers are human, just like you and me. Although the five W’s (who, what, where, when, why) are important in reporting, I think the “why” is the most important when it comes to a community understanding and support.