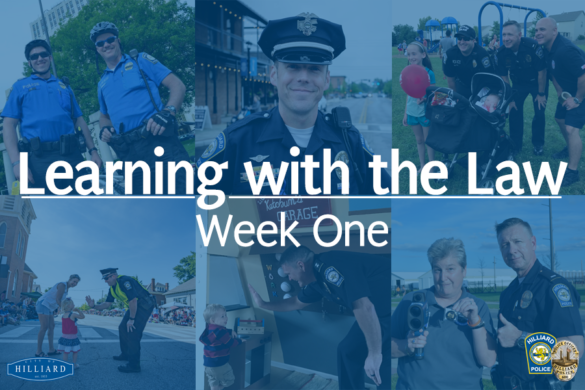 Learning with the Law – Week One

Editor’s note: This is the first in a 14-week series of first-person accounts of the highly popular Hilliard Division of the Police Citizens Police Academy.

Last night was my first night of the Hilliard Division of Police’s Citizen’s Police Academy. I really didn’t know what to expect walking into this, but I’ve always been interested in law enforcement, so my co-worker suggested I enroll in the class.

It was a little like the first day of school. You walk in hoping you will have good people in your class and that the teacher will be cool. I knew my friend Letty was also taking the class, but she wasn’t there yet, so I took a seat toward the front (good student habits, you know?)

The first thing we did was eat (shout out to Subway!) and get our picture taken for an ID badge. Par for the course, once the ID printed I looked like I had a balloon for a head. Nonetheless, it does make me feel a little official.

We followed with a little trivia, then went around and did introductions. Everyone talked about their relationship to Hilliard and why they were there (and their favorite cop show; I said mine was “COPS”). A few people were originally from out of the country, some were from other states, and some, like me, were Hilliard — born and raised.

The best part was realizing how many people from different walks of life have an interest and support for the men and women in blue. It makes the concept of community policing stand strong in my mind.

We talked a lot about what it takes for a police force to be successful and how important it is for those in the community to follow the law and partner with the police in order to maintain peace.

In the Hilliard Division of Police, there are about 60 officers. I was interested to learn that more than 90 percent of police departments in this country have fewer than 50 officers. I later found out that, of the 1,000 departments in Ohio, it’s not unusual to have around ten officers or fewer. That made me appreciate how seriously Hilliard takes the safety of its residents – and made me glad to live here!

After our history lesson, we took a department tour, which gave me a better idea of all of the different things the police do. Because I am a City employee and am involved with Recreation and Parks Department events, I’ve been to the Safety Services building a number of times and am familiar with quite a few officers. I thought I had a pretty decent idea of the place, but it was cool to get an idea of what a normal day might be like for the officers.

My favorite places were the roll call room, the shooting range, and the property room. Standing in roll call listening to Sgt. Settles talk felt a lot like I could be standing listening to Terry Crews brief in “Brooklyn Nine-Nine”. Lt. Clark said investigations aren’t like they are on TV. They’re not solved in an hour.

The range was bigger than I thought it would be, and the Citizens Police Academy shooting week is one I am looking forward to the most. We learned a lot about the different ways officers train and how firearms training is arguably the most important. Some departments don’t have a range to train in, so it’s awesome that Hilliard police have that resource.

Side note: They actually have a rifle that doesn’t shoot bullets – it shoots little bean bags instead. They’re used in the field when a bullet isn’t necessary, but a little sting is. Lethal force is always a last resort.

We ended in the property room, where all evidence is recorded, entered and stored. I swear, you can smell the place the second you get on the bottom floor. (Is there a skunk down here?) I guess they have days when physical evidence gets destroyed; sometimes CPA alumni members help destroy it. Check back with me after this whole thing and I may have a new story to tell about a hammer and some stress relief!

Overall, I’m looking forward to what is to come from this course and getting to know this group of people who will undoubtedly become friends. I was a little worried initially that because each of the 14 courses is four hours long that the first night would drag on, but it really flew by. It felt way less like a “class” and a lot more like fun. 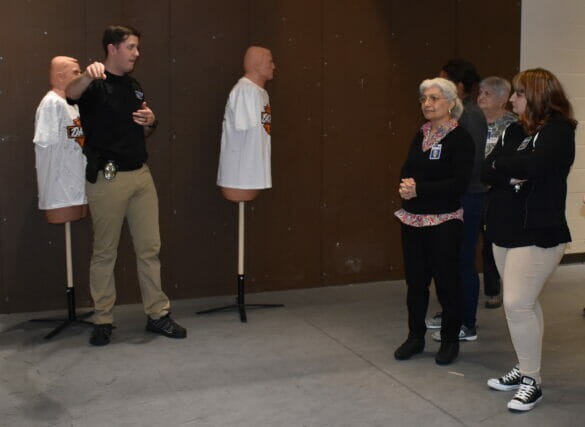