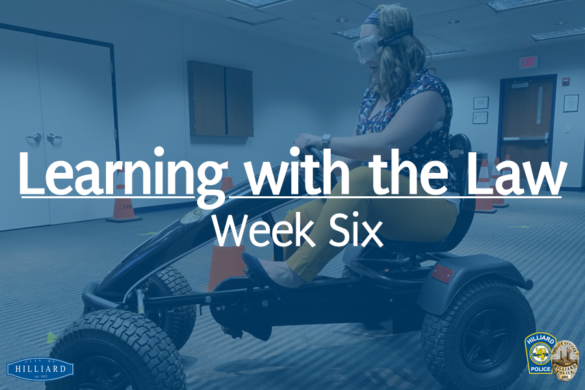 Learning with the Law – Week Six

Editor’s note: This is the sixth in a 14-week series of first-person accounts of the highly popular Hilliard Division of the Police Citizens Police Academy.

This week’s Citizens Police Academy class was super fun. It was the most hands-on so far, and there was a lot of laughter involved.

We started out with dinner from Circle K (whose chicken tenders are surprisingly amazing) and some talk with Chief Robert Fisher about steps the department takes to ensure all officers exhibit the highest levels of integrity in their work.

Week six of CPD was all about OVI – operating a vehicle under the influence of alcohol or drugs. A vehicle is considered anything you can use to travel on the street that has wheels, including bikes and scooters. (Whether that includes rollerblades, as I inquired, is yet to be determined. I suspect that either way that is not a good idea!)

Alcohol is a really important topic. It’s a legal drug, which makes it a little more complicated than illegal drugs. Use of illegal drugs is a “no” across the board; alcohol is fine as long as it is used responsibly, but there are specific restrictions on it.

Based on alcohol’s legality, people are more likely to abuse or ignore those restrictions. For example: driving drunk. Two things about drunk drivers that floored me were that a typical drunk driver drives while intoxicated 80 times a year. On average, 2 percent of people on the road at any one time are OVI.

This lesson debunked a lot of general misunderstandings I had about drunk driving. Most people know that the legal blood alcohol content limit to operate a vehicle is 0.08, but you can be arrested even if you are not over the legal limit. It is possible for a person to have a legal BAC, but still be impaired.

Alcohol affects people differently based on a number of factors: age, gender, tolerance, quantity, if they have eaten, etc. Just because your BAC is under 0.08 does not necessarily mean it is okay for you to drive.

On the contrary, it is not illegal to have alcohol on your breath and drive; it is simply illegal to drive impaired. You can be arrested for operating a vehicle impaired on drugs that are prescribed to you. When a prescription says to use caution when operating heavy machinery, this is what it means!

Another thing I learned is that there are many factors and identifiers that determine if a person is impaired. There are certain things that tip officers off to the fact that someone may be impaired, but short of belligerence and explicit admission, multiple factors have to be true to charge someone with OVI.

One of the most important pieces of that decision is the “eye check” portion of the field sobriety test. Eyes have involuntary movements that tell an officer you are impaired.

If you have ever watched a cop show or movie (or have driven on the freeway during third shift), you’ve probably gotten an idea of what a sobriety test looks like. Two employees from HPD (off the clock) were our guinea pigs and spent their time hitting the bottle while we learned about everything I just mentioned. We watched them go through the first few steps of a field sobriety test, involving eye checks, walk and turn, and one-leg stand. From those tests, we had to determine which of them we would arrest (if either) and guess their blood alcohol content. After we determined our course of action, they each took a breath test. We came pretty close on those guesses.

After our lesson on OVIs, we got to do a number of hands-on activities that gave us some perspective on what it is like to drive (or do other things) drunk.

We split into groups and did four different activities. My group started with doing a figure eight on a pedal bike thing. We wore drunk goggles that imitated being more than twice the legal limit to drive. I couldn’t even drive a trike through cones well in a situation where I knew I was safe, and it really gave us all perspective about how dangerous it is for people to operate vehicles when they are actually drunk.

We did the walk and turn and one-leg stand in different BAC-level goggles, played cornhole in goggles, and drove another course that simulated driving around a corner, pulling into a garage, and backing out. For that course, we wore goggles that are considered a 0.25 BAC. That was scary! I wouldn’t want to feel like that ever, let alone behind the wheel.

We closed this week by talking about illegal drugs. Obviously, you shouldn’t be doing them, period, especially when operating a vehicle. We got to watch videos of people on some of the most prevalent drugs in our society (one of each of the seven drug categories).

This class was fun for us, but it was only fun because it wasn’t real. The concept of any of those things we did being real, and someone really being unable to function and operate a vehicle, is scary.

This reminded us all of the importance of thinking before you put yourself and others at risk, and always having a designated driver.

Bottom line: If you think you are good to drive, get a ride home!