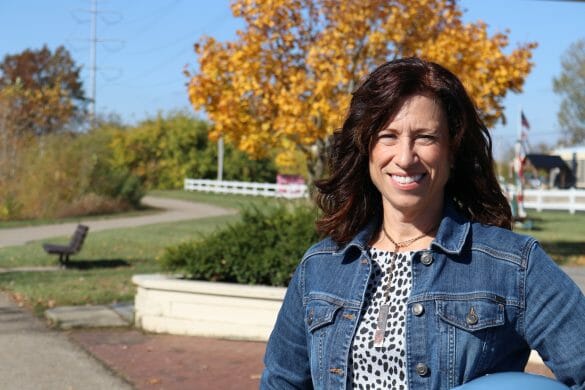 The City of Hilliard’s Deputy Engineer Letty Schamp has been named one of Columbus CEO’s inaugural group of Future 50 leaders. This honor was awarded to influential people with the ideas, the energy, and the hearts to move Columbus forward in the future.

The new, annual program kicks off in January with a special 13th issue of Columbus CEO Magazine, with honorees sharing their ideas for moving the region forward. The 50 leaders will gather to choose an annual project that resonates with the Future 50 core values of altruism, achievement, boldness, creativity, and inclusivity.

“Letty is an invaluable member of the Hilliard team,” said Albert Iosue, Director of Public Service. “She is dedicated to her profession and works tirelessly to implement solutions not only to keep the City’s infrastructure moving, but also to continually improve it for our citizens. I can’t think of anyone more deserving of this honor than Letty.”

In her role as Deputy City Engineer, Schamp provides oversight in the planning, programming, budgeting, engineering, and construction of capital transportation projects throughout Hilliard. Schamp initiated Hilliard’s Pedestrian and Bicycle Mobility and Safety Program in 2013, which dedicates financial resources to make sidewalk connections, trail extensions, and crosswalk improvements. She leads City safety initiatives, including the integration and correct use of roundabouts throughout the region, reducing the number of fatal and serious injury crashes on our roadways.

Schamp is the Chair of the Central Ohio Greenways Board, served on the Central Ohio Transit Authority Board of Trustees from 2016- 2019, and is presently a member of Mid-Ohio Regional Planning Commission’s Sustainability Advisory Committee.

While Schamp has been a City of Hilliard engineer for 22 years, some residents may know her from her recent appearances in City social media videos as Holly Hilliard and as “Professor Roundabout,” a superhero who teaches the roundabout rules. She also is an involved Hilliard resident who can frequently be seen walking to work or riding her bike on a trail.

Please join us in congratulating Schamp. We look forward to following her journey with the group of Future 50 leaders in 2020.