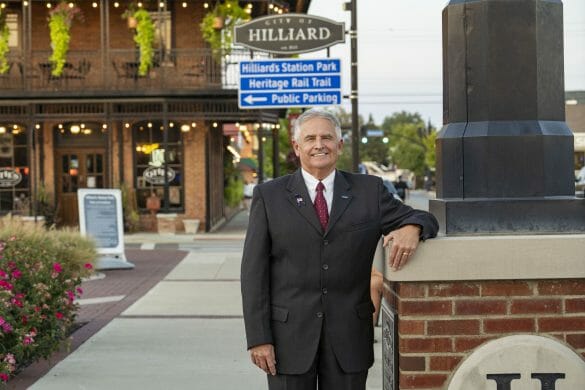 Don Schonhardt first brought his accounting firm to Hilliard in 1994 because he saw a promising city in which to grow a business.

Four years later, he moved to Hilliard because it promised great opportunities to raise a family.

And in 2000, he cast his hat into the ring for an open seat on Hilliard City Council for a chance to make a difference through public service and leadership.

Now, as Schonhardt prepares to retire after four consecutive terms as Hilliard’s elected mayor, he is looking back on two decades of work to improve the local business climate, enhance quality of life for families, and position the city as a forward-focused community of choice.

“When I speak to school kids, they almost always ask, ‘Why did you want to become mayor?’” Schonhardt said.

“What I tell them is that I grew up in a family where my siblings and I were encouraged to always be involved. Whether it was in school, church, or sports, it was important to take an active role in the various organizations in which you were involved.”

By the time he had moved his business and family to the City of Hilliard, Schonhardt had learned a great deal about the city. At the time, many residents were concerned about the rapid pace of growth. Schonhardt had his own views on the subject.

“While uncontrolled growth can represent a significant problem, I knew a no-growth policy would be very damaging to the future of the community that I had chosen for my business and to raise my family,” he said. “I also felt my experience in governmental accounting would be beneficial to the municipal government, which was struggling economically. So, when there was an opportunity to apply for a vacant position on Hilliard City Council, I threw my hat into the ring.”

In 2000, he was appointed to the vacant Council seat. He subsequently ran for and was elected to that seat. He was chosen to serve as Council president in 2002 and then, in 2003, ran for and won the mayor’s position, first taking office in January 2004.

“We focused on smart growth, concentrating on bringing commercial development and jobs to the community,” Schonhardt said. “That allowed the City to grow its income tax base and the school district to grow its property tax base. We also worked with developers to keep residential growth at a more manageable pace.”

Initial major projects such as bringing BMW Financial Services to the city and extending Trueman Boulevard north to Davidson Road proved to companies that Hilliard was serious about business, was prepared to invest in infrastructure, and intended to keep its promises.

“We completed Trueman Boulevard as a design-build project in just six months,” he said. “The business community and commercial developers saw that we could get things done, that we were interested in business, and that we would work with them.”

Schonhardt and the City also focused on the future residential needs of the community. Hilliard built the kinds of housing and quality-of-life amenities that would attract and retain Baby Boomers and Millennials. While there was some community pushback, Schonhardt knew it was important to develop modern apartments and condos in areas the tenants could access without getting in their cars. The City focused on turning Old Hilliard into a community gathering spot and developing areas such as Landmark Lofts, where residents could walk or bicycle to enjoy restaurants, shopping, and special events.

Under Schonhardt’s tenure, the City built First Responders Park and Hilliard’s Station Park. The complete streets program continues to make the community more walkable through the development of multi-use trails and more sidewalks. Hilliard Family Aquatic Center was developed and the East Pool renovated and renamed as the Clyde “Butch” Seidle Community Pool.

“I think we’ve successfully created outstanding opportunities to live, work and play, all within a reasonable distance from where people live,” he said.

There are numerous other accomplishments in Schonhardt’s legacy. He is proud that smart growth has allowed income tax revenues to more than double without increasing the income tax rate for residents. That growth has allowed the City to continue to offer residents great amenities such as parks, signature events and top-notch residential services such as snow removal.

“We have created a community that has a lot of pride, that focuses on family. Hilliard is a place the next generation will like to call home,” he said.

Looking back, he can’t think of major goals for the community he did not see accomplished.

“When I first ran for office, it was pretty much my intent to be a one-term mayor,” he said. “I would not have run again had we not had the successes we were able to have in the time I have been in office. We were getting things done that actually exceeded my expectations.

“I have committed 19 years of my life to public service for this community, and when I turn the lights off in this office on Dec. 31, I’m leaving this place in much better shape than the day I walked in here. None of our many accomplishments would have been possible without the dedicated, hard-working employees of the City of Hilliard. Our community is blessed to have so many employees who truly believe in serving the community in which many of them live. They take great pride in the work they perform and they have been instrumental in making Hilliard the great city it is today.”