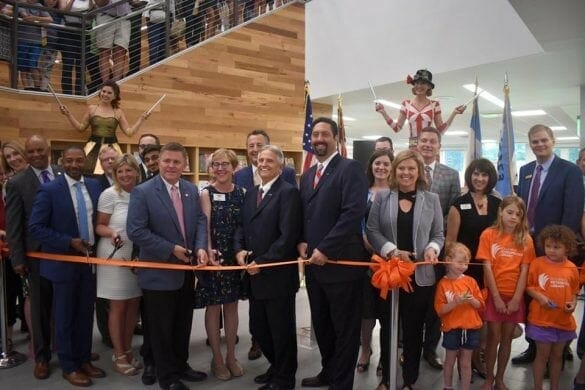 Hilliard is now home to the largest branch of all the Columbus metropolitan Libraries. Yesterday, the community welcomed the new 2-story, 63,000-square-foot facility at its public grand opening.

“This is a historic occasion and I truly believe that this facility will serve our community for a very, very long time. What a great time to be in Hilliard,” Schonhardt said.

Construction of the library began last summer at the Hickory Chase property, south of Davidson Road and east of Leap Road. The building was originally built in 2009 to be a Community Center for senior citizens but foreclosed before it was able to open. City and Library officials saw potential in the vacant building and decided to turn it into a library.
The new library is more than three times the size of the old Hilliard Branch. It boasts a larger children’s area, dedicated space for teens and homework help, more parking, many rooms for community gatherings, a café and a three seasons room.
The library is located at 4500 Hickory Chase Way, south of Davidson Road and east of Leap Road.