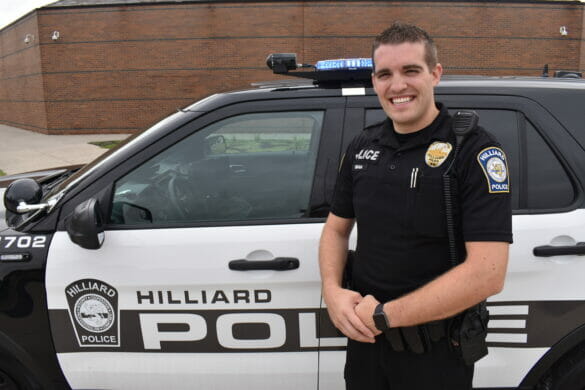 The Hilliard Davidson High School community will get to know a new face in a familiar uniform this year.

Hilliard Division of Police Officer Sam DiSaia will take on the role of school resource officer at the high school this August. DiSaia will serve in the position for the next four years, following the recent retirement of Officer Rich Quigley.

“We’re happy to have Officer DiSaia joining our team of School Resource Officers at Hilliard City Schools,” said Chief of Police Robert Fisher. “He is an enthusiastic officer who has a passion for education and community-oriented policing. We look forward to students and staff members getting to know him in this new role.”

DiSaia joined Hilliard police in 2017 and has served as a law enforcement officer since 2012. Originally from the Powell area, he is a graduate of Olentangy Liberty High School and Ohio University, where he earned a bachelor’s degree in criminology.

As a high school student, his favorite subject was science.

“I actually considered becoming a science teacher — it was between that or a police officer,” DiSaia said. “So, this is a perfect fit for me. I can take both of my passions and put them together.”

The police division is currently making plans to increase the number of officers to allow for one in each of the middle schools, continuing the partnership between the police division and school district to ensure the safety of students.

“We are excited to welcome Officer Sam DiSaia to the Hilliard Davidson Wildcat family,” said Aaron Cookson, principal of Hilliard Davidson High School. “We are confident Officer DiSaia will work hard to ensure the safety of our staff and students, build strong relationships with our Wildcat community, and continue the strong bond the HCSD shares with the HPD.”

We asked Officer DiSaia to answer some fun questions. Here’s what he had to say:

What sports did you play in high school? Varsity swimming all four years

What’s the last movie you watched? The new “Aladdin”

If you could switch jobs for a day, what would you do? An airline pilot, for sure!

Who is your favorite musical artist? That’s hard to choose one, but I love the Dave Matthews Band

What inspires you? You know those YouTube videos of people doing good deeds and paying it forward? I love those.

What are your hobbies? I love to ski and spend time with my family. I’m a huge hockey guy. I’m a fan of the Columbus Blue Jackets and the Pittsburgh Penguins, so it’s a real conflict of interest.

What are you most looking forward to as an SRO? Serving as a positive influence in the lives of the students, seeing the same people every day and building meaningful relationships.