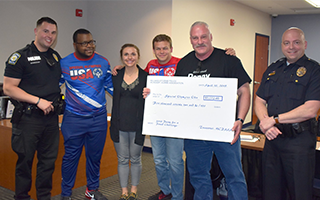 First responders participating in the 2019 Penny For A Pound fundraiser hoped to raise as much money as last year.

They not only met the goal, they tripled it.

On April 10, representatives of Penny For A Pound, including Hilliard police officers and Norwich Township firefighters, presented a check for $5,072 to Special Olympics of Ohio.

Special Olympics athletes and volunteers from the Hilliard Citizens Police Academy were also on hand for the presentation.

HPD’s Lt. Doug Lightfoot, one of the event organizers, said he was thrilled with the figure.

“This money is going to go a long way to help Special Olympics athletes achieve dreams and build memories that will last a lifetime,” he said.

The annual weightlifting competition, held in March at the Bo Jackson’s Elite Sports Complex, is in its fourth year. The event was started by Hilliard police officers in 2016 but has since grown to include Norwich Township firefighters and first responders from throughout Ohio.

In the past, the event has benefited the Hilliard Food Pantry, Get Behind the Badge (which supports family members of fallen officers) and Nationwide Children’s Hospital.