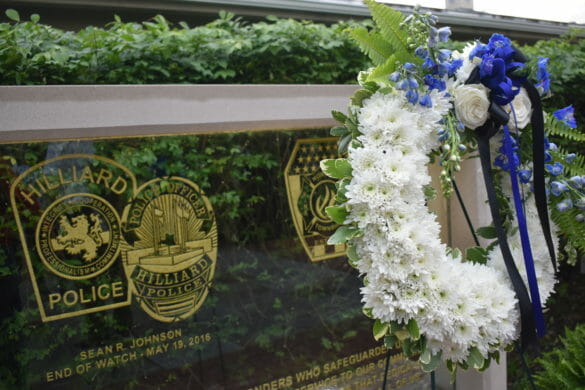 Posted May 13, 2020 in Police by Andrea Litchfield

Each spring, the City of Hilliard holds a Peace Officers Memorial Day service at First Responders Park to honor all Ohio police officers killed in the line of duty.

This year, residents are invited to virtually attend the Hilliard Police Memorial Ceremony at 7 p.m. on Tuesday, May 19. The ceremony will be live streamed on the Hilliard Division of Police Facebook page.

The event, which will be closed to the public due to COVID-19 restrictions, will honor and remember peace officers who have died in the line of duty, including two in Ohio last year and our own Officer Sean Johnson, whose end of watch occurred on May 19, 2016. Officer Johnson is the only Hilliard officer killed in the line of duty since the department’s creation in 1957.

The abbreviated ceremony will include the placing of the memorial wreath by the Hilliard Division of Police Honor Guard and the playing of “Amazing Grace” on bagpipes by Norwich Township Firefighter Mike Reiterman. The ceremony will be followed at 7:15 p.m. with the premiere of a memorial video on the agency’s social media channels.

“Although we cannot all gather in person as a Hilliard community, our agency is committed to honoring those who gave the ultimate sacrifice, especially our very own Officer Sean Johnson,” said Chief of Police Robert Fisher. “We hope residents will join us virtually on May 19 as we pay our respects, and we look forward to gathering again in the future.”

Located in the center of Old Hilliard at the corner of Center and Main streets, First Responders Park is local monument built for a national impact. The park contains original artifacts from sites in New York City from ground zero, as well as a memorial dedicated in 2017 to Hilliard’s fallen first responders.

The park is meant to be a place to remember, to visit, and to mourn as well as to be a public show of appreciation for all those who give their lives to protect those in their community. National Police Week takes place this year from May 10 to May 16. National Peace Officers Memorial Day is May 15.