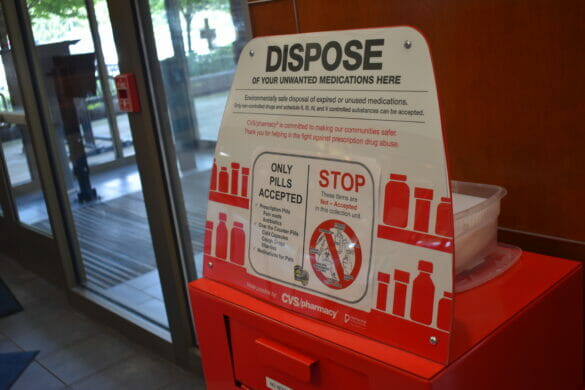 A record number of prescription drugs were safely disposed of during a recent Drug Take Back Day event hosted by the Hilliard Division of Police.

On Saturday, Oct. 24, HPD collected about 150 pounds of unwanted medication. The local effort was part of National Drug Take Back Day, arranged by the Drug Enforcement Agency. Residents were encouraged to use the drive-thru service at the police department, located at 5171 Northwest Parkway.

It’s the most medication HPD has ever collected on any single day, said Property Room Custodian Todd Harper, who oversees the initiative.

The drive-thru disposal service, offered twice per year, is free and anonymous for consumers, with no questions asked. Only pills are accepted. No needles, sharps, asthma inhalers, and illicit drugs are accepted at the drop box.

In addition to providing a valued service, Drug Take Back Day aims to reduce drug abuse and trafficking. According to the 2018 National Survey on Drug Use and Health, 9.9 million Americans misused controlled prescription drugs. The study shows that a majority of abused prescription drugs were obtained from family and friends, often from the home medicine cabinet.

HPD also has a prescription drug drop-off box located in the lobby of the Safety Services Building for residents to bring in unwanted medications in pill or capsule form throughout the year.

During the last year, HPD collected 282 pounds of medication in the box, bringing the grand total for both initiatives to about 432 pounds, Harper said.

“Too often, these medications make their way into the wrong hands,” said Chief of Police Robert Fisher. “By safely disposing of those prescriptions, our citizens know they have made their own families and communities safer.”

For additional details about proper medication disposal, including other resources, visit www.SWACO.org.