The sale of Grener and purchase of Jerman will result in numerous community benefits.

“There are several major steps and multiple parties involved in these agreements, but they will benefit the entire community,” said Council President Andy Teater. “The City will be able to develop new parkland with more sports fields, which would not be possible without the revenue generated through this proposal. Hilliard schools will see additional revenues without an influx of new students. High-paying jobs also will be created, boosting our local economy.”

In 2015 and 2016, the City purchased approximately 103 acres of land between Cosgray and Leppert roads. The City sold 6.5 acres of that land for the Bo Jackson Elite Sports Facility in 2016. (A detailed history can be found below.)  This real estate was originally intended to be developed by the City for athletic fields, but was deemed to be financially impractical for that purpose.

As part of the current agreement, the City will buy an additional 20 acres of adjacent land from the school district. The City will sell approximately 104 acres of land to a company that plans to construct a $200 million data center complex on the property. The City will continue to own 12.5 acres, used in part for an existing parking lot.

The benefits of this agreement include: 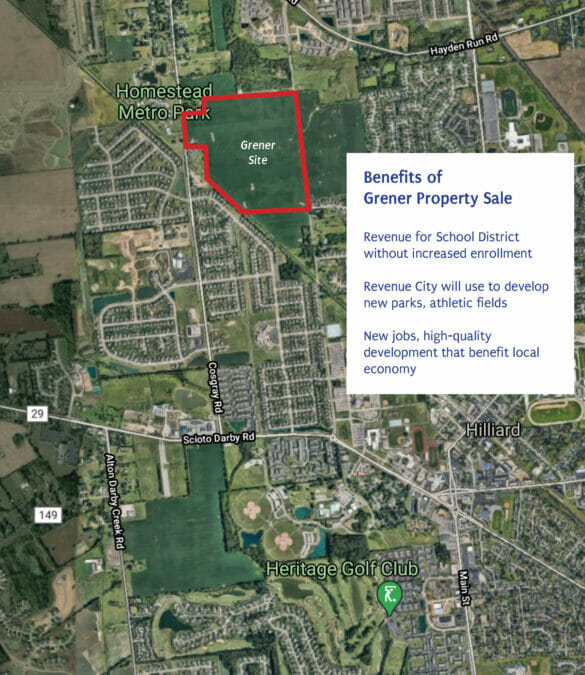 In a second agreement, the City of Hilliard, in collaboration with the Hilliard Development Corporation, will purchase 125 acres of land (known as the Jerman property) along Scioto-Darby Creek Road, just west of and adjacent to Municipal Park. The park will be developed to include active sports fields and other amenities that were not financially practical on the Grener site. The Jerman property is better suited than the Grener property for the City’s future athletic fields.

The benefits of this project will include: 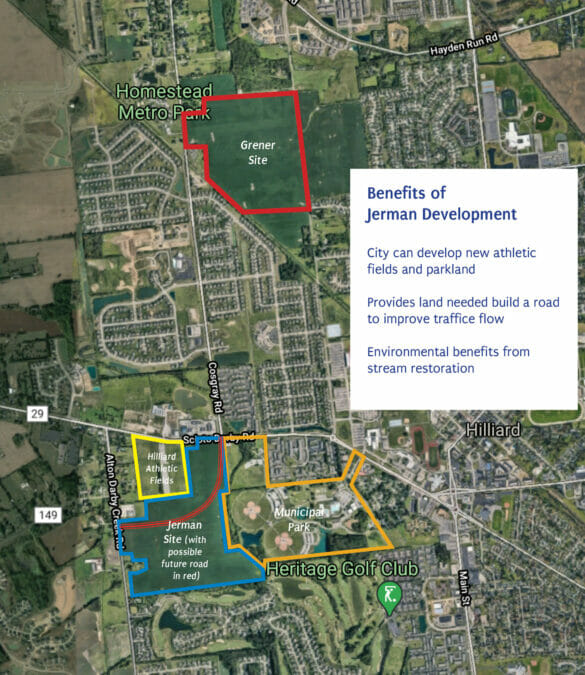 These projects are expected to benefit the City, the School District, and the community.

“As the various parts of this plan are executed, Hilliard will benefit from new parkland development, increased revenue for our schools, and a boost to the local economy with minimal impact to services,” Teater said. “This is the kind of high-caliber development communities across the country are actively competing to attract. The fact that Hilliard is seen as a destination for this type of high-tech opportunity speaks highly of our community.”

Brian Wilson, Hilliard City School District treasurer, said the district views this deal as a win for all involved.

“We are very appreciative of the City working with us on this economic development project,” Wilson said. “Certainly an added benefit is the sale of the property, which will result in additional dollars for capital improvement projects in the District.”

Help us plan the new park

One of the next steps for the City of Hilliard will be to seek community feedback about the kinds of amenities it would like to see in this future park. Residents are encouraged to share their thoughts by clicking on “Jerman Parkland Development” at Talk2Us.hilliardohio.gov.

2003: The School District bought 123.6 acres of property east of Cosgray Road and west of Leppert Road from the Grener family.

2015: The City realized there was a community need for additional soccer fields to meet the demand for youth sports. The School District’s undeveloped Grener property was identified as a possible site for such fields. The District sold the City 56 acres for $2.26 million.

2016: The City bought an additional 47 acres from the District for $1.88 million. In June, the City sold 6.5 acres for construction of the Bo Jackson Elite Sports Facility for $292,500. The Sports Commission was organized to develop plans for the Grener property.

2019: The City’s Sports Commission presented concept plans to develop the Grener property with athletic fields and other amenities. When the plan was announced, the Commission’s estimated price tag for onsite improvements and utilities exceeded $34 million. City officials determined this cost made development of the Grener site into sports fields financially unfeasible.

2020: The City began exploring solutions, which included the possible sale of the property for data centers. Wanting to be prepared to take advantage of such an important opportunity if it became available, City Council modified zoning for the Grener property in June 2020 to allow for the possibility of data centers. The language included with Council’s rezoning put in place specific standards such as significant setbacks from Cosgray and Leppert roads, extensive landscaping and mounding, and architectural standards that would ensure a high-quality development.

The benefits of the Grener agreement include:

The benefits of the Jerman agreement include: