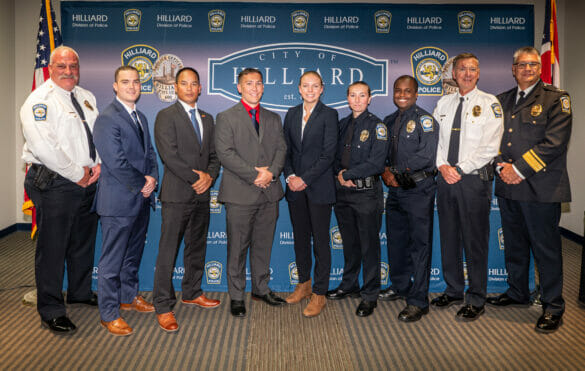 Six new police officers were sworn into the City of Hilliard Division of Police on Friday. It is the single largest hire in the Division’s history.

The oath of office was administered by Chief of Police Michael Woods. He noted the six new officers set themselves apart from the original group of nearly 100 applicants by displaying the qualities and characteristics needed to become Hilliard police officers.

“Getting to this point was not easy. Each new officer went through a series of interviews, physical testing, and a thorough background investigation,” said Chief Woods. “These individuals are willing to accept the responsibilities associated with this profession and have the desire to serve our great city.”

The officers will replace members that have retired, and their hiring demonstrates the City of Hilliard’s commitment to keeping the community safe, he added.

Officers Joshua Valentine, Sean Gill, Madeline Grobe, and James Girgis will enroll into the Columbus Police Academy, where they will spend the next 28 weeks learning police operations. They are expected to graduate in winter 2023 and will then complete field training.

Irby joins the City of Hilliard after serving with Cleveland Police since 2018. He grew up in Cleveland and has an associate degree from Notre Dame College. While attending Notre Dame, he completed an internship with the U.S. Marshal’s Service. He comes from a law enforcement family, with his father, grandfather, and uncle all serving in the Cleveland area.

Roubic also grew up in the Cleveland area and has served with Cleveland police since 2018. She was a member of the Ohio Army National Guard and served as a military police officer until she was honorably discharged in 2021. She is currently pursuing a degree from Kent State University.

Valentine grew up in the Columbus area and later moved to Lancaster. He served with the U.S. Army as a military police officer from 2011 until his honorable discharge in 2014. He served with the Conroe, Texas, Police Department for one year prior to returning to central Ohio. He has an associate degree in criminal justice from Columbus State Community College.

Gill grew up in New York and came to Ohio to attend The Ohio State University, where he earned a bachelor’s degree in criminology. He comes from a law enforcement family, with his father serving as a Chief of Police for Lancaster, New York.

Girgis was born in Thailand and lived there nearly five years before coming to central Ohio with his parents. He earned an associate degree from Columbus State Community College and a bachelor’s degree from Franklin University. Girgis served in the U.S. Marine Corps from 2010 to 2015, and his duties included guarding the U.S. Embassy in Oman, Jordan, and Thailand.

For years, HPD has made a conscious effort to implement a community-oriented policing philosophy and build a unique bond with the people of Hilliard. Individuals who believe they embody the spirit of a vibrant city, can play an active role both in the department and in the community, and can continue to make Hilliard one of the best places to work and live should visit WearTheHPDBadge.com to see if they have what it takes to be a member of the Hilliard Division of Police.