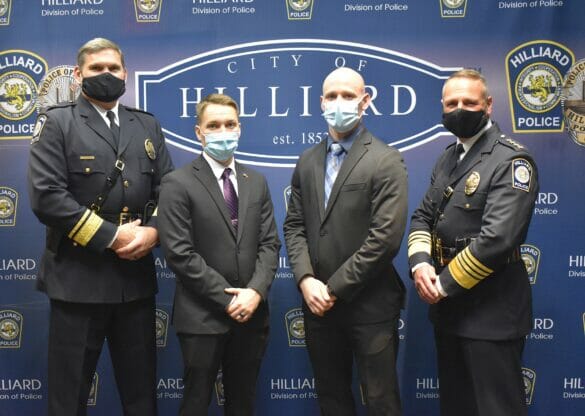 Two new police officers were sworn into the Hilliard Division of Police on Monday.

The new officers raised their hands and recited the oath of office given by City Manager Michelle Crandall.

Officers Adam Showalter and Quinn Izar will enroll into the Columbus Police Academy next week, where they will spend the next 28 weeks learning police operations. They are expected to graduate in summer 2021.

Showalter grew up in Hilliard and is a graduate of Hilliard Darby High School. After high school, he joined the U.S. Marine Corps and served 11 years in active duty until recently being discharged and returning to Hilliard.

Izar is from the northern Ohio area, growing up in Chardon. He graduated from Chardon High School and went on to Bowling Green University, where he earned a Bachelor of Arts degree. He served in the Ohio National Guard and was discharged in 2018.

Traditionally, the oath of office ceremony is attended by agency and community members with an open reception. Due to pandemic restrictions, the new officers were joined only by command staff and members of their immediate families.

“We’re excited to welcome these new officers into our HPD family, even if it looked a little different this year,” said Chief of Police Robert Fisher. “We look forward to our community getting to know them and wish them the best over the next several months in the police academy.”

Upon graduation from the academy, each officer has the opportunity to pin on the HPD badge, he said. They should remember to allow each of their decisions to be guided by the Division’s core values: Integrity, Cooperation, Commitment and Professionalism.