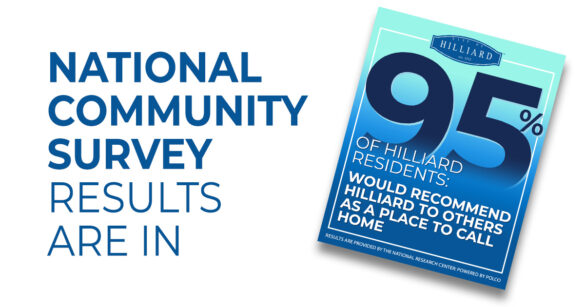 City’s Residents Give High Ratings to Living, Working in Hilliard

More than 96 percent of surveyed residents say Hilliard is an excellent or good community in which to live, and 95 percent say they would recommend this community to others as a place to call home.

Hilliard residents also gave much higher ratings to the vibrancy of their community’s downtown and commercial districts, compared to how residents of other communities across the country feel about their own cities.

Those are just a few of the results of the 2022 National Cities Survey, a community perception survey performed in September and October for the City of Hilliard by polling and research firm Polco. Nearly 500 residents from a pool of 2,800 randomly selected households responded to the online and mailed survey.

“Overall, the survey results are very positive. Our residents gave higher-than-average positive sentiments about living in Hilliard than residents in cities across the country expressed about their own communities,” said David Ball, Director of Community Relations.

Among the results in the survey:

According to Polco’s Brandon Barnett, there were four key findings from the Polco survey:

“The National Cities Survey (NCS) allows communities such as Hilliard to compare how their residents feel about a variety of topics to the feelings of residents in hundreds of other communities nationwide,” Ball said. “In this way, we can see if there are areas we need to improve upon while setting a benchmark to gauge our future progress in key areas.”

They gave “similar” ratings to residents in other communities in 94 areas.

The only category in which Hilliard residents’ responses lower than the national benchmarks was in what impact respondents feel the economy will have on their families in the next six months. Barnett said it has been typical in the past year to see lower positive response rates in questions about the economy.

The City will use the data in the survey as a benchmark in future years to determine whether it is making progress in key areas.

“In this way, the NCS allows apples-to-apples comparison of resident opinions over time,” Ball said. “This gives the City data on our progress and improvement from survey to survey. It also identifies many of our areas of strength.”