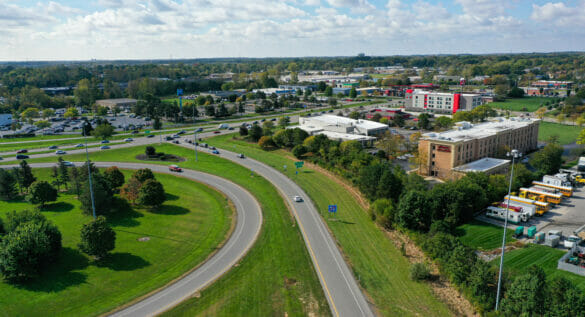 The City of Hilliard’s busiest entry point is getting a facelift this fall and winter.

Hilliard City Council has approved funds to add new almond-colored fencing on all four corners of the Cemetery Road and Interstate 270 (I-270) interchange.

The Ohio Department of Transportation (ODOT) has reviewed the plans, allowing crews to begin removing the existing chain link fence and surrounding brush to prepare for a new three-rail fence.

When finished, the City’s most high-profile entry point will have 7,700 linear feet of fencing and improved visibility into the City.

Replacing the existing chain link fence will greatly enhance the overall look of the portion of I-270 that’s within City boundaries, said City Manager Michelle Crandall.

“This project is more than a fence. It’s a way to showcase our City and local businesses to the hundreds of thousands of people who drive on I-270 each day,” said Crandall.

Over the past year, the City has been working to clear out vegetation from the existing fence to increase visibility into the City.

“Not only will a new three-rail fence look better, but it will also reduce vegetation and debris from getting entangled in it,” said City Forester Andrew Beare.

The new fence is expected to be completed by spring 2022, but the project is dependent on weather conditions.