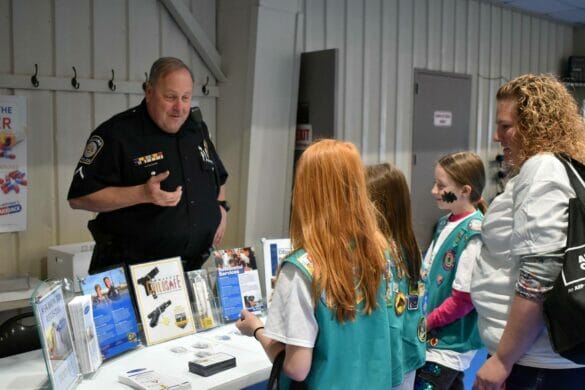 A familiar face to many at the Hilliard Division of Police has a new title: Community Relations Officer.

Officer Mike Deaton, who has served the agency in numerous capacities for the past 23 years, stepped into the position in January.

Officer Deaton will dedicate his time to creating and deepening relationships with members of the Hilliard community. Specific duties will include fostering communication with area businesses and overseeing the Division’s nationally recognized Citizen’s Police Academy program.

“I love people. I love talking to people,” said Officer Deaton, who has been a full-time Hilliard officer since 1998 and also served as a part-time Norwich Township firefighter. “You become a directory for those in need, and that’s how you build up a good rapport.”

Officer Deaton has served in a wide variety of positions during his tenure at HPD, including as a school resource officer for 13 years at Hilliard Darby High School. In that role, he established enduring relationships that have resulted in his students approaching him even to this day, according to Chief of Police Robert Fisher.

He has also led the agency’s Police Explorer program, influencing countless high-school-aged explorers with his easy-going charisma and keen sense of humor. The explorers in his care have gone on to a wide variety of police-related careers, Chief Fisher said.

Recently, Officer Deaton was selected as a recipient of the Franklin County STAR of Law Enforcement Award. He is also certified as an instructor of the Civilian Response to Active Shooter Event (CRASE) course.

Additionally, Officer Deaton is certified as a Crime Prevention Through Environmental Design (CPTED) specialist and is available to provide security assessments to Hilliard businesses and churches, by appointment.

“We come out and take a look at how their operations are running — look at the building and make comments and suggestions about what they can work toward to make their properties more crime-proof,” Officer Deaton explained.