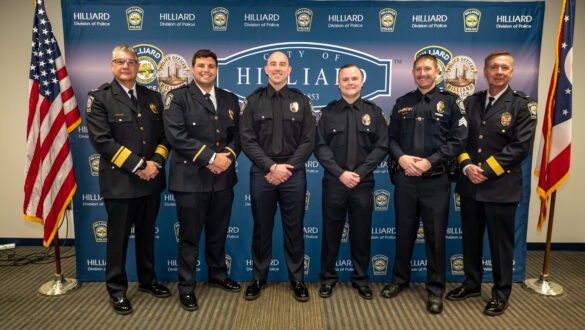 Two new police officers were sworn into the City of Hilliard Division of Police on Monday as two more were promoted.

Officer Jeffrey Long and Officer Michael Sherrill are new to Hilliard, but not to law enforcement.

Long grew up in northeast Ohio and graduated from the University of South Alabama. He has been a police officer for seven years, serving the communities of Prichard, Ala. and Akron, Ohio.

Sherrill is from the Dayton area and has served the Springfield community since 2020. He served in the U.S. Army National Guard for eight years and currently is enlisted in the Air National Guard.

They will spend the first few weeks learning Division policies before entering 15 weeks of field training with a certified training officer.

Sgt. Austin Vogelsang and Lt. Tyler Harris were sworn into their new roles. Their selection for promotion was the result of an extensive and competitive interviewing process, said Chief Michael Woods.

Vogelsang joined Hilliard police in 2012 after working in finance. He served as a patrol officer for five years and as a member of the Crash Investigation Team. In 2017, was assigned to the Division’s Special Investigations Unit, in which he served as the lead narcotics investigator. He was also an investigator on a federal counterfeit case.

He is a graduate of Purdue University with a bachelor’s degree in marketing and advertising. During his Hilliard police career, he has been earned numerous awards, including the Life-Saving Citation for providing life-saving CPR.

Harris joined Hilliard police in 2015. He grew up in West Jefferson and went on to Otterbein University, graduating with a bachelor’s degree in criminology. After college, Harris began his law enforcement career at the Delaware County Sheriff’s Office, serving as a corrections officer, until his hire with HPD.

He was promoted to sergeant in 2020 and has supervised the Crash Investigation Team, TASER program, and K9 Unit.

Harris has also held several ancillary responsibilities, including serving as an instructor in the agency’s defensive tactics and women’s self-defense programs.

For years, HPD has made a conscious effort to implement a community-oriented policing philosophy and build a unique bond with the people of Hilliard. Individuals who believe they embody the spirit of a vibrant city, can play an active role both in the department and in the community, and can continue to make Hilliard one of the best places to work and live should visit WearTheHPDBadge.org to see if they have what it takes to be a member of the Hilliard Division of Police.