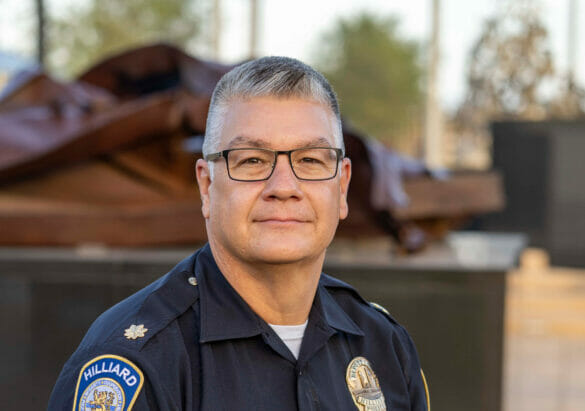 Hilliard’s Deputy Chief of Police Michael Woods is no stranger to interviews. As a seasoned law enforcement leader with decades of experience, much has been written about the man who took on HPD’s number two spot (known as the “DC”) in September. But, did you know he got his professional start fixing breakfast at Wendy’s, is a proud #GirlDad to triplets, and a perfectionist when it comes to home landscaping? We sat down with DC Woods to learn more about the man slated to be Hilliard’s next police chief.

You’re in an elevator with a stranger. What do you tell them about yourself?

I’m a Columbus guy – born and raised — and graduated from Franklin Heights High School. I grew up with four sisters and am married with three daughters, so I’m used to being around women.

Tell us about your family.

My wife, Dana, and I have been part of the Hilliard community for 26 years (married for 28). Our daughters attended St. Brendan’s and graduated from Bishop Ready High School. The girls are now 23.

What was your first job?

The Wendy’s on Stringtown Road making breakfast. I worked the early shift in the 1980s and made omelets.

How did you get into policing?

Engineering Graphics 11. I thought I wanted to be a civil engineer and made it halfway through that class at Ohio State. At that point you could drop out if your grade wasn’t good. I dropped out, took it again, squeaked out a C and thought, “Maybe I shouldn’t be doing this.” A friend’s dad was a Columbus police sergeant. I changed my major to criminal justice and took the Columbus police civil service test. I was given the opportunity to join and finished my undergrad at Capital University.

Describe yourself in three words.

What drains your energy?

Boredom. I hate sitting around the house doing nothing.

Challenges – learning something new and completing a task.

What’s something you’ve done but will never do again?

Bungee jump. The sensation of going down was one thing, but my mind couldn’t grasp I was going back up on the recoil. I did it out of a hot air balloon.

You’re invited to the BBQ. What dish are you bringing?

I’m a trivia master – you want me on your trivia team!

What’s a piece of technology you can’t live without? Don’t say cell phone.

My wireless irrigation control system – I love that it knows when it’s going to rain.

Snow ski in Europe. I’ve been all over Colorado, and to California, Canada, Utah, and New York.

What subjects could you discuss all day?

My family, snow skiing and college football. There were three teams you could root for in my house growing up: Ohio State, Notre Dame and whoever is playing Michigan. I’m also a Browns fan.

What’s your favorite board game?

Trivial Pursuit, of course! When the girls were little, we liked Pictionary.

Has anyone ever compared you to a celebrity?

Lou Ferrigno (The Hulk) and Harry Connick Jr. But I don’t think so.

Chocolate sheet cake with white icing and vanilla ice cream so I can smash it all together in a bowl. My girls do it, too.

Have a favorite quote?

“You win with people.” — Woody Hayes