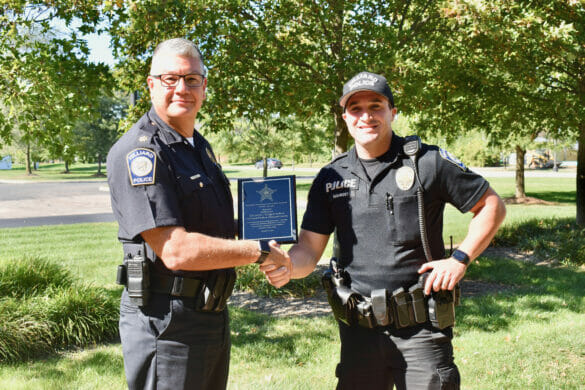 A Hilliard police officer has been named a STAR of law enforcement.

The officers recognized for the “STAR” award should be the epitome of a law enforcement officer, according to the Franklin County Sheriff’s Office. The officer should be of high ethics, good character, and go above and beyond for the residents within their jurisdiction and Franklin County.

Officer Gigandet joined Hilliard police in 2014. He spent the first several years of his policing career working as a second shift patrol officer, quickly earning the reputation as a reliable, hardworking and compassionate officer.

In 2016, Officer Gigandet received the Division’s Life-Saving Award for his actions administering Narcan during an overdose situation on I-270.

That incident is one of several in which Officer Gigandet’s has worked selflessly to save another life. He was the first officer to deploy an agency-issued automated external defibrillator (AED) on an individual in distress. Additionally, he has responded quickly to multiple medical calls, administering CPR until paramedics arrive.

Fellow officers refer to Officer Gigandet as a team player whose positive attitude impacts others every day.

In 2020, Gigandet transitioned to the Division’s Traffic Safety Unit, which focuses on responding to the City’s traffic needs. While on a traffic stop in 2021, Officer Gigandet seized two kilograms of heroin/fentanyl, removing the dangerous drugs from the community and likely saving more lives.

He also has served as a member of HPD’s Honor Guard, Bicycle, and Accident Investigation units and is currently an agency instructor in emergency vehicle operations.

“Officer Gigandet always gives 100 percent in all his areas of focus with a smile and the respect of his colleagues,” said Sgt. Justin Cramer, who serves as Gigandet’s supervisor. “He is a self-initiator and regularly conducts training on his own — above the agency minimum training standards.”