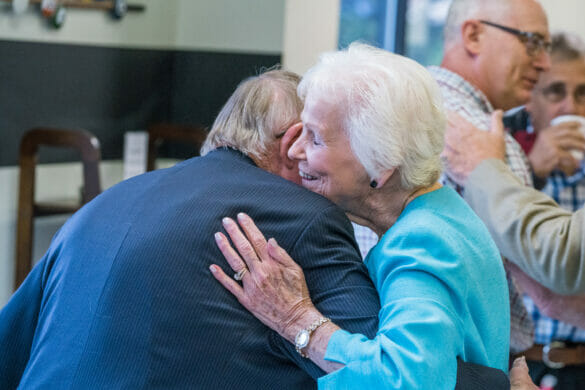 Three new members will join the Hilliard Senior Citizen Hall of Fame during an induction ceremony on Wednesday, Oct. 6 at the Senior Center.

Donna Jean Olenhouse and the late Garnet and Martin Boerner will be recognized at the 35th annual induction ceremony.

“These individuals have made such positive impacts on the community,” said Adult and Senior Programmer Amy Van Huffel. “It’s great to see their efforts recognized publicly.”

Each year, a couple of senior citizens are recognized for a lifetime of service, personal achievement, and a positive image of aging. Inductees may be living or posthumous.

Olenhouse is being recognized for her commitment to the seniors of Hilliard for more than 20 years. She has set an example as a physically active senior adult by running two half marathons and a tri-telethon after age 60.

She is extremely active in the Hilliard community, having served as president of the St. Brendan’s Church Women’s Club, president of a parent-teacher organization, and as the Knights of Columbus Ohio “Lady of the Year” in 2013. Olenhouse is also a neighborhood watch leader.

Her St. Brendan’s work continues to include serving as a Eucharistic minister, overseeing alter linen maintenance, counting collections, providing communion to the sick and elderly at rest homes, and being an active member of Kiros Prison Ministry.

Garnet and Martin Boerner were involved in the Hilliard community for more than 50 years before their passing. The couple attended Hilliard Methodist Church where Garnet served as Parish Visitor for almost 40 years, visiting members of the church in the hospital, writing letters, and praying with them during hard times.

Martin Boerner was a plumber in Hilliard for 40 years, bringing both cheer and a plunger to the job to solve life’s problems for many community residents, often at no charge when customers were disadvantaged and could not pay. Martin also served as a Church Trustee and lead the process of building a new church in the 1950s.

The Senior Citizen Hall of Fame Induction will be held at 5:30 p.m. Wednesday, Oct. 6. at the Hilliard Senior Center, 3810 Veterans Memorial Drive.