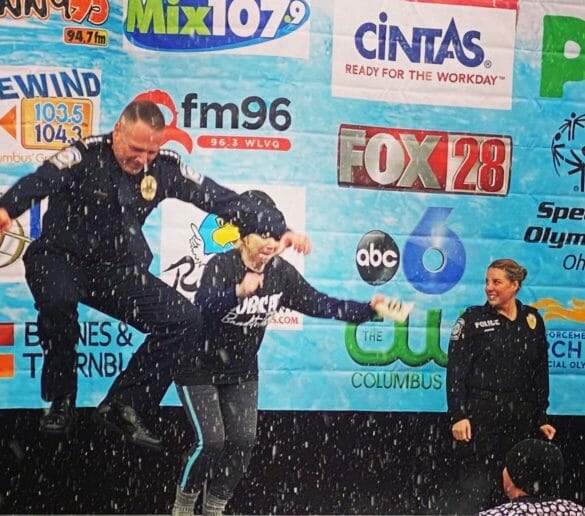 If you’re going to plunge into icy waters in February in central Ohio, you might as well go all the way under the water.

That’s what Hilliard Chief of Police Robert Fisher decided as he prepared to participate in the Columbus Polar Plunge alongside others. In total, four members of the Hilliard Division of Police were “freezin’ for a reason” last weekend in support of the Special Olympics of Ohio.

In addition to Fisher (who was joined by his wife, Regina), Officer Hunter Schweickart, Detective Kristen Winter and Officer Brandon Long also took the plunge. Long, who organizes the HPD team, also serves as a Special Olympics coach with Schweickart.

Additionally, Hilliard police participates in the annual Law Enforcement Torch Run for Special Olympics each June and — with the Norwich Township Fire Department — hosts a softball game between Special Olympics athletes and first responders every summer.

This was the first year Chief Fisher took the plunge. “I’m used to water,” said Fisher, who served in the U.S. Coast Guard. “Just not cold water.”