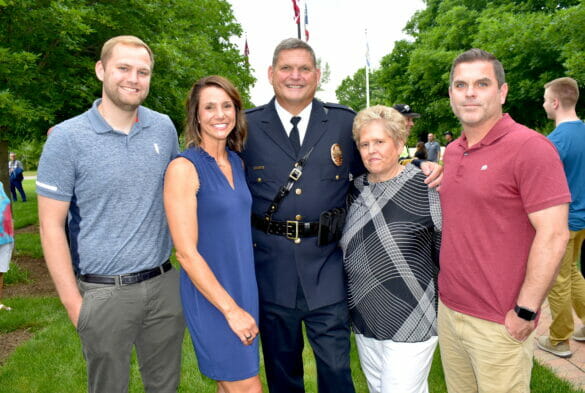 ‘Chief Grile’ Both a Name and a Family Tradition

For Hilliard’s new police chief, “Grile” is just as much a family name as “Chief.”

Chief of Police Eric Grile, who has served as deputy chief since 2016, was sworn in May 24 to lead the Hilliard Division of Police. He comes from a long line of chiefs. His father, grandfather, and uncles on both sides of the family have all served as fire chiefs — the family’s lifestyle guided by the 24-hour-a-day business of public safety.
That family tradition continues with his younger brother, Chris Grile, who currently serves as a battalion chief with
the Norwich Township Fire Department.

As a child in the 1970s, Eric recalls walking through fire bays in the village where his father, Tom, served as chief. Tom was first named Chief Grile at just age 23 with the all volunteer Basil Joint Fire District in Baltimore. In 1972 he started the first fire-based, all volunteer, 24-hour paramedic service in Ohio before taking the helm of the Huber Heights Fire Department from 1976 to 1998.

The boys’ mother, Rosemary, rang the bell at the fire house, alerting volunteers to calls for help and dispatching runs from the kitchen table, warning her young boys to turn down the television so she could hear the phone.

Holidays often weren’t celebrated on holidays, and it was common for the entire family to run out the door halfway
through a gathering or skip an hour of baseball practice when an emergency call came.

During the blizzard of 1978, Tom left the house to respond to calls for help. Rosemary put on an oversized pot of chili for her husband to take to the station when he returned, but they didn’t see him for five days.

“We ate chili for a week,” Eric recalled with a groan.

Despite being immersed in the fire service culture, the brothers said their parents never encouraged them to work in
public safety themselves. Tom, however, did insist that each of his boys earn college educations. Eric enrolled at Wright State University without a plan and majored in business management.

“I was in my last year and still had no idea what I was going to do,” he admitted. “And this sounds cheesy, but that’s when the show ‘COPS’ came out, and I loved watching that show.”

As a boy, Chris begged for a police and fire radio in his bedroom. His parents allowed it, but Tom warned his son
they couldn’t listen to his older brother working when Rosemary was home.

“Mom didn’t want to hear him get hurt,” Chris recalled. “She never saw the danger in being a fireman, but I can
remember her not wanting to talk about him being a police officer.”

Chris was a junior in high school when he had the epiphany that he wanted to be a firefighter/EMT. He was leaving
baseball practice when a call came, so he and Tom detoured to a fire scene — a familiar routine.

“Dad gets out of the car, and he starts barking orders,” Chris said. “I made eye contact with one of the guys in the
backseat of the truck. I heard the sirens and watched him get ready and I thought, ‘That’s it. This is what I want to do.’ And I never thought about anything else after that.”

Chris made a deal with his father. He would become trained to work at a fire department but also had to enroll
into college full-time. At age 20, he was fully certified and moved to the Columbus area to work alongside his uncle at the Franklin Township Fire Department.

The brothers’ professional paths didn’t cross until 2016. By that time, Chris had made the move to Norwich Township and shared with Eric news of an opening for deputy chief at Hilliard police.

“I read the job description and thought, ‘That’s me.’ I saw a place where my actions would help,” said Eric. “I thought it would be cool to work with my brother, not knowing how often it would be.”

Except for a few scenes —including one where both brothers made the same photo in the newspaper — their paths don’t cross often.

“I think he’s come to my office once,” Eric laughed. “When we pass in the hallway it’s just, ‘Hey, what’s up?’ and that’s it. I think it’s because when we’re working, we’re working.”

Although the two don’t agree on everything, Eric said their management style is similar: “Let’s do it and stop talking
about it.”

They also share some characteristics from their mother and father, the latter of whom died in 2019.

“Dad used to always say, ‘If you want to fix something, put yourself in the situation to fix it,’” Chris said. “Both of our
parents were always willing to take on the role no one else wanted so they could have influence. I know that rubbed off on us.”

“Some people shy away from having responsibility, and that’s not us,” he added. “I hope Eric and I are also willing to
recognize when we screw something up and to admit those things. Dad was the same way.”

Rosemary said she’s extremely proud of her boys and knows her late husband is “ecstatic” to see Eric take the helm at HPD next door to his brother.

“I always thought they would be leaders because that’s what they had seen,” she said. “I’m just so honored and proud to be in a public safety family. They’re good kids — good people.