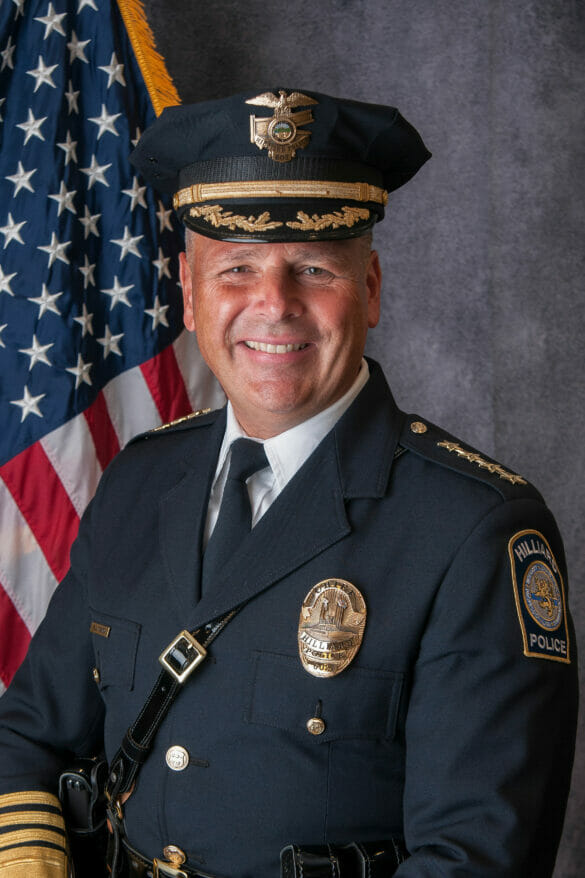 Chief of Police Robert Fisher will retire from the City of Hilliard May 21, leaving the division he has served since 2012.

“I’m proud to have had the opportunity to wear the badge,” said Fisher, who was promoted to Chief of Police in 2015. “I’m proud of the people here and the things that our team continues to accomplish. As a team, we’ve achieved a lot, and we’ve grown tremendously during the eight years since I came here. Thanks to that same team, I know the organization is going to continue to grow and do great things.”

Deputy Chief Eric Grile will be promoted to Chief after Fisher’s last day, according to City Manager Michelle Crandall. Because Grile is also approaching retirement, Crandall said a search will begin soon for a deputy chief, with the intent of that individual being promoted to Chief when Grile retires.

She said she is grateful that both Fisher and Grile are prioritizing the needs of the Division and the City by planning their retirements in a way that ensures the smoothest possible transition to future leadership.

“Chief Fisher has been a credit to law enforcement and to the City of Hilliard,” Crandall said. “By prioritizing relationships inside his department, with members of the community, and with his peers in other organizations around Ohio, he has helped make Hilliard Division of Police a highly regarded agency that others strive to emulate.”

Fisher said retirement was a difficult choice to make after a career of 30 years working in public safety. Although he is still considering his future options, leaving Hilliard will be bittersweet.

“I originally got into law enforcement because I wanted to catch bad guys and help people out,” he said. “As I’ve grown in my role, the responsibility has changed, and my focus has changed. It’s important to realize that relationship building is the key to being successful in any position in law enforcement.”

Chief Fisher said he feels proud of the progress he and the division have achieved.

“We have become recognized across Ohio as one of the premier law enforcement organizations,” he said. “Our team has really set an example of what a community policing organization should be doing. I’m proud of what each man and woman serving in this division have helped accomplish. I’ll be leaving behind a great team that’s going to continue doing the things we’re doing even better.”

Chief Fisher came to the City of Hilliard in 2012 as Deputy Chief of Police, serving in that role until 2015 when he was promoted to Chief of Police.

He also served as Petty Officer in the U.S. Coast Guard from 2001 to 2009, including serving with the U.S. Navy performing port security operations during Operation Iraqi Freedom.