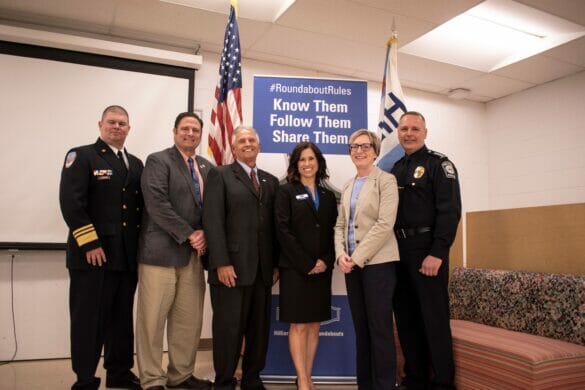 The City of Hilliard wants to inform all drivers about the rules of the road and reduce crashes in roundabouts through a #RoundaboutRules campaign.

The campaign began yesterday with a launch event that included Mayor Don Schonhardt and several City officials, Ohio Department of Transportation (ODOT) and The Ohio State University Risk Institute. The goal is to educate road users about the #RoundaboutRules. They are:

At the event, ODOT unveiled its new series of videos to demonstrate the correct way to drive a roundabout. These videos and other safe driving materials are being shared through Ohio’s Driver Education and Training Programs and with the public through a new web page currently under development.

Throughout April, drivers will see more educational information from the City on how to properly use roundabouts, including temporary message board signs at certain roundabouts and a traffic blitz.

Hilliard Division of Police traffic officers will be covering two of the city’s multi-lane roundabouts during morning and afternoon peak hours and sharing information cards with drivers to remind them about the #RoundaboutRules.

“Officers will be at the Main Street and Cemetery Road, and at Britton Parkway and Davidson Road roundabouts to ensure drivers know how to safely navigate these intersections,” said Hilliard Police Chief Bobby Fisher. “While our roundabouts have certainly reduced the severity of the crashes at these intersections, we want to take it to the next level and decrease the number of fender-bender, property damage crashes at them too with the #RoundaboutRules campaign.”

While the City of Hilliard wants divers to know the #RoundaboutRules, it’s also important to note that roundabouts save lives. According to ODOT Highway Safety Program Manager Michelle May, 27% of all traffic deaths occur at traditional intersections. Nationally, roundabouts have been proven to reduce severe crashes at intersections by 82%.

“During my time as a firefighter and now as chief, we have never had to use the ‘jaws of life’ at any crashes at roundabout intersections, said Norwich Township Fire Department Chief Jeff Warren. “I cannot say the same thing about regular or traditional intersections. I’ve seen far too many serious and fatal crashes over the years. Many of them are preventable.”

Roundabouts have decreased the severity of crashes and now it’s time to decrease fender-benders with the #RoundaboutRules campaign.