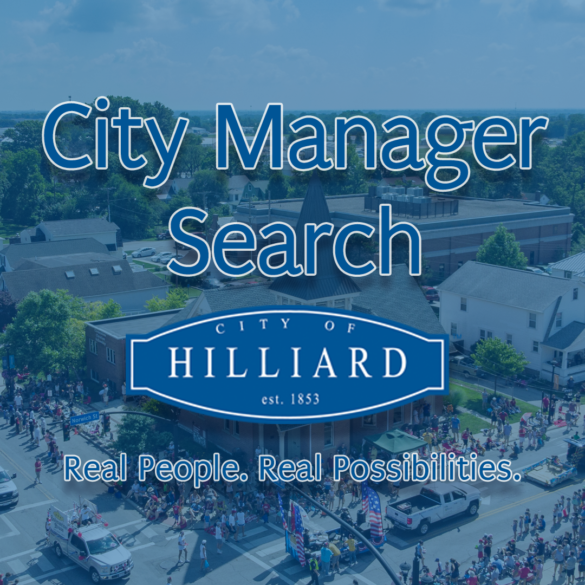 The interview process will last three days and will include a public meet-and-greet with the finalists from 5:30 to 7 p.m. Tuesday, Sept. 24, at the Safety Services Building, 5171 Northwest Parkway. RSVPs to dhicks@hilliardohio.gov are requested for planning purposes, but are not mandatory.

Those scheduled for the initial round of interviews are:

The interview candidates were selected with the assistance of The Novak Consulting Group, an experienced search firm specializing in assisting with public sector executive hiring. In identifying candidates who would be a good fit for the Hilliard city manager position, Novak applied qualities that were developed in part through focus groups and surveys of the community and City staff.

No official date has been set for the announcement of the preferred candidate, according to Council President Kelly McGivern.

“At the end of the day, it is important for us to take whatever time is needed to make the best choice possible,” McGivern said. “This is an extremely important decision, and one that Council is taking very seriously.”

“The transition from a council-mayor form of government to a council-city manager system presents a tremendous opportunity to set the course for the future of our community,” McGivern said. “The person we hire to lead us through that transition will be one of the most important decisions we as Hilliard City Council will ever make. Novak has brought us a slate of experienced and talented individuals who will help lead this community into the future with a thoughtful vision and strategically identified priorities.”

In November 2018, Hilliard voters approved amendments to the City charter that approved a change in the form of government. In Hilliard’s current system, an elected mayor manages the administration on a daily basis. By comparison, a city manager is a professional municipal administrator hired by City Council to manage the day-to-day operations of the organization. In that system, City Council’s roles include hiring the city manager, setting policy and passing legislation.

“We are seeking a strong, proactive leader who is an excellent communicator, committed to exceptional customer service, and focused on sound fiscal management,” McGivern said. “We want a city manager who can work with Council to set short- and long-term goals, is experienced in economic development, and who can bring best practices in local government service delivery to Hilliard. We also will be seeking someone with a proven track record of building relationships, who can work collaboratively with Hilliard City Schools, township officials, the local business community, and other local, regional and state governmental agencies.”