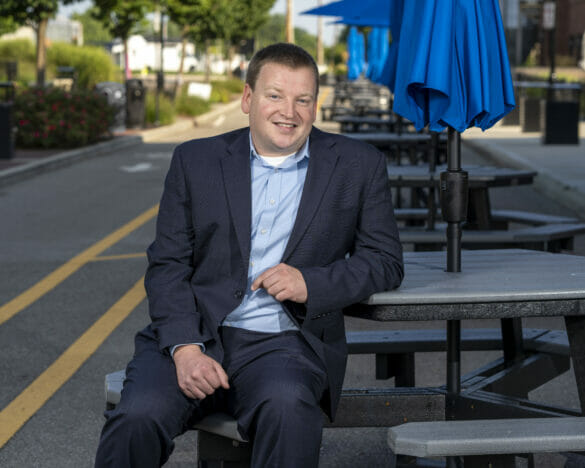 Posted May 11, 2022 in Development by Andrea Litchfield

Leveraging his vision, technical expertise and influence, David Meadows has modernized the City of Hilliard’s approach to Economic Development, propelling the suburban community into a hot spot for development.

Along the way, he built relationships by quickly earning the trust of community stakeholders, including business leaders, school administrators and colleagues.

Now, many boardroom dreams are reality in the City of Hilliard: Amazon Web Services is building on its second site, businesses are connected on the City’s nearly 40-mile fiber optic cable network, and downtown Hilliard is undergoing revitalization following the opening of its anchor, the Center Street brewery-market.

Meadows has managed the sale of $15.53 million in real estate for economic development purposes, created the Hilliard Façade Improvement Program which has supported more than $500,000 in new investments in Old Hilliard, and supported 65 small businesses during the COVID-19 pandemic by creating emergency relief programs that issued more than $319,000 in direct support to businesses

City Manager Michelle Crandall said she has been impressed with Meadows’ enthusiasm, dedication, and creative approaches.

“David builds strong and trusting relationships with a variety of key stakeholders throughout the region and state,” she said. “Parts of economic development are naturally competitive, but there is an important component that requires local governments and private entities in central Ohio and beyond to collaborate.”

The future continues to look promising with several more projects on the cusp of fruition. A $150 million mixed-use development known as TruePoint is poised to fortify the City’s northeast side, enticing office tenants, restaurants and amenities for residents and urban dwellers.

In Downtown Hilliard, Meadows is working with developers to transform the district into an urban destination that pays homage to the City’s rural roots. Expected improvements include parking, retail and luxury residences that harmonize with Hilliard’s Station Park and First Responders Park. Small businesses enjoy the opportunity to apply for various grants created under Meadows’ watch.

The carefully executed sale of 104 acres known locally as the Grener property not only made room for Amazon Web Service’s next data center and its 100 jobs, but funded the purchase of 125 acres of property for the construction of a new Community Center, expected to open in 2025. The land will also be developed into athletic fields, park amenities, and a new connector road to improve traffic flow on the City’s west side.

These projects have been planned alongside community stakeholders to ensure development is conducted in a positive and responsible manner.

“Our region will rise or fall based on our ability to come together and collectively solve key issues related to workforce development, infrastructure improvement and housing,” Crandall said. “David understands this and works hard to build on Hilliard’s economic success while also contributing his time and talents to helping central Ohio be successful.”