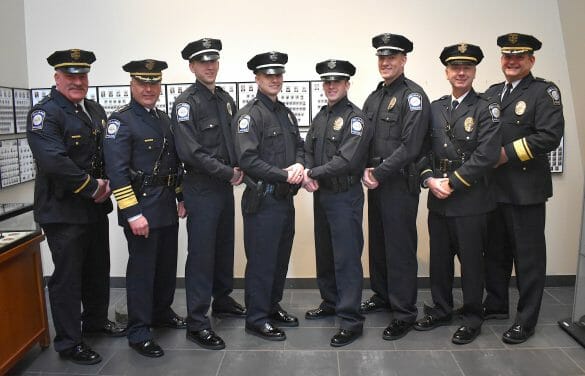 Four new Hilliard Division of Police officers are among 52 young men and woman who took the oath to protect and serve as graduates of the 132nd class of the Columbus Police Training Academy.

“To wear the uniform of a Hilliard police officer is a significant accomplishment and demonstrates a person’s willingness to accept the challenge of making this community a better place to live, work and play,” said Chief of Police Robert Fisher. “We look forward to the Hilliard community getting to know these officers.”

HPD’s Officer Harden received the class “Top Shot” award for his marksmanship skills. He scored 1,917 out of 2,000 possible points in the category.

The 132nd class, which is comprised of officers from six central Ohio police jurisdictions, received an average score of 89 percent on the Ohio Peace Officer Training Academy examination.

The division is continuing its recruitment efforts and looks to hire additional officers to enter the academy in June 2020. Those who are interested to becoming Hilliard police officers are encouraged to attend a Career Day on Jan. 25. Applications for the 2020 year are due Jan. 27 with a written examination set to take place Feb. 2.

For more information on how to become a member of HPD, visit WearTheHPDBadge.org. The new officers have begun their three-month field training with the division and are expected to begin patrolling the streets of Hilliard this spring.