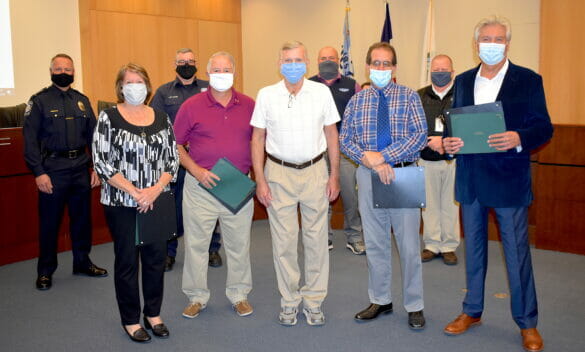 Four citizens are being recognized by first responders for jumping into action to save a man’s life.

Residents Jim Buchanan, Buzzy Zorich, Peggy Green and Kevin Corvo worked together to quickly provide CPR and call for help during a recent medical emergency. The patient, Bruce Buchanan, survived the event and is recovering.

On Sept. 16, a group of residents were enjoying a game of pickleball at the Roger A. Reynolds Municipal Park when Bruce Buchanan went into cardiac arrest.

Before Bruce became unconscious, Zorich recognized he was not acting normally and called 911.

Jim Buchanan, Bruce’s brother, performed chest compressions. Peggy Green, a fellow Pickleball player, was Jim’s support person during the time he was giving compressions and directed him through the process.

Kevin Corvo, a local reporter with ThisWeek News who was at the pickleball courts to write a newspaper story, also called 911 and cleared Bruce’s airway.

When police officers and medics arrived on scene, they relieved the bystanders and initiated resuscitative efforts on Bruce. He was then transported to the hospital.

“Each caller provided dispatchers an accurate description of the patient’s condition along with the exact location of the emergency so medics could be quickly dispatched,” said Somerville. “Rapid notification to 911, along with the quick initiation of bystander CPR, made a clear difference for this patient.”

Norwich Township Fire Chief Jeff Warren said the difference in a patient’s life is often made prior to emergency medical service arrival.

“Sudden cardiac incidents require bystander intervention,” said Chief Warren. “To see a bystander performing CPR or using an AED when we arrive is very encouraging from the professional perspective.”

During Tuesday’s council meeting, Bruce Buchanan thanked the four for their actions saving his life. He was joined at the meeting by extended family, who with council members provided the group a standing ovation.