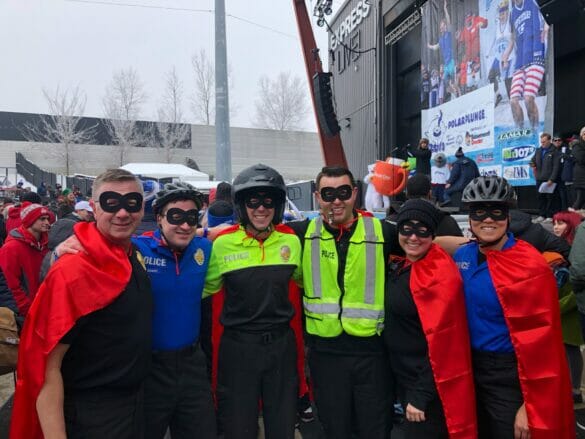 Six members of the Hilliard Division of Police were “freezin’ for a reason” last weekend in support of the Special Olympics of Ohio.

Seeing his fellow officers join the cause this year is “heartwarming,” Long said.

“The officers have so much to give, and to see them share with our amazing athletes is very exciting,” he said. “Experiences like that allow barriers to be broken, and everyone wins. It embodies what inclusion is all about.”

Hilliard police also participates in the annual Law Enforcement Torch Run for Special Olympics each June and — with the Norwich Township Fire Department — hosts a softball game between Special Olympics athletes and first responders every summer.

Interacting with athletes out of uniform creates “a sense of trust and comfort with us that carries over into uniform,” said Long, a Hilliard Davidson High School graduate who joined HPD in 2011. “Athletes are able to see us in a different light and realize the uniform isn’t as scary as it may initially seem,” he said.

The athletes aren’t the only ones winning. Long said the relationships have allowed him to grow personally and professionally.

“It has made me a better person,” he said, “and I strive to share the importance of Special Olympics with as many people as I can.”