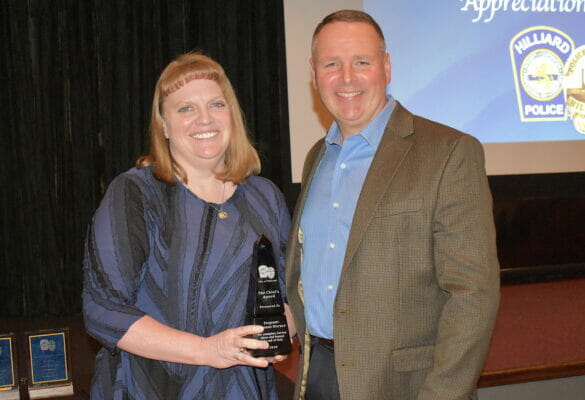 A Hilliard police sergeant who organized a large-scale active shooter training exercise with area schools was surprised with the agency’s first Chief’s Award during an awards dinner Thursday.

Sergeant Suzanne Muraco was among many police officers recognized for going above and beyond the call of duty during the Hilliard Division of Police’s 2018 Awards Ceremony and Appreciation Dinner.

Muraco, a Hilliard native who joined the agency in 1995, led the organization of a full-scale active shooter training exercise with all 1,600 members of the Hilliard City School District. The exercise, which took place in August, was the first of its kind in scale and is considered a model for other communities.

“While the idea of putting together this massive drill seemed daunting, she took on the task and immediately started gathering a team to get it done,” said Chief Robert Fisher. “The drill taught lessons that would be applied to save lives in the future, should such a tragic event occur.”

Mayor Don Schonhardt also presented the Mayor’s Award to Officer Kristen Winter and Officer Vanessa Spears. The two responded to the home of an elderly resident who had passed away, and comforted the widow. After the initial call, they committed themselves to checking in on the woman, including taking her to dinner on their own time.

“This kind of heart and compassion exceeds the demanding standard of above and beyond the call of duty,” Schonhardt said. “They reached out to this woman not for accolades, but out of compassion, and epitomize the human side of the men and women in blue.”

Schonhardt presented three individuals with the Community Service Award: Officer Randall Pugh was recognized for his work counseling a man arrested for OVI to help get his life back on track; Officer Dustin Vance was awarded for a situation in which he gave a pair of his own boots to a homeless man; and Lieutenant Doug Lightfoot was awarded for his positive work in the community, including creating the Penny 4 A Pound fundraiser and working with area special needs students.

The agency also presented Employee of the Year Awards to each of the three bureaus.