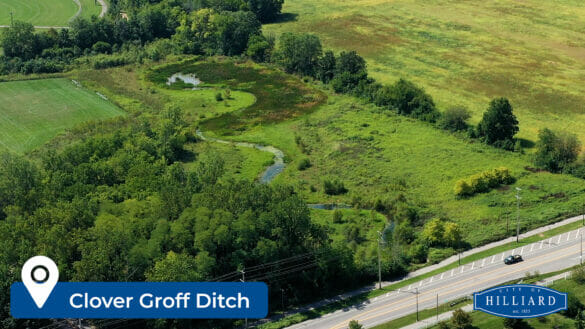 Posted May 12, 2022 in Administration by Anna Subler

The City of Hilliard has received $600,000 to restore green space and improve wetland near Clover Groff Run, a stream located within Roger A. Reynolds Municipal Park and the Big Darby Watershed.

The funding came from the Mid-Ohio Regional Planning Commission (MORPC) as part of the Clean Ohio Conservation Funds (COCF) program, which was approved by voters in 2008 to acquire green space and restore stream corridors.

City of Hilliard Project Engineer Jeff Cox said the City has been working on Clover Groff Run for about five years to improve the environmental health of the stream.

“It was originally a “farm ditch” created to move water through the park,” Cox said. “The problem was the original ditch wasn’t providing adequate habitat to the stream’s native species. So, every time it would storm, the natural habitat would get washed away.”

Since 2017, the City has restored 1,100 feet of Clover Groff Run. The additional funds from MORPC will allow the last 2,800-foot portion of the stream to be updated.

The City plans to continue widening the stream’s floodplain area, add more natural plants, and meander the channel to slow down the erosion process.

“Changing how the stream moves will improve water quality and provide wildlife with much needed habitat,” said Cox.

The Clover Groff Run project was one of four projects chosen by MORPC that received more than $3 million combined.

Work on Clover Groff Run will likely begin and conclude in summer 2023.