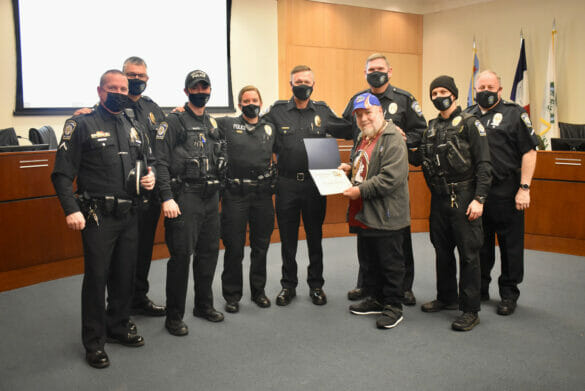 Armed with a trash grabber, two buckets, a reflective jacket and a heart of gold, Hilliard resident Ron Smith has a mission to keep this community clean.

Smith was recognized Monday night by the City of Hilliard for his efforts picking up trash throughout the community. He was presented the Good Citizenship Award from City of Hilliard Division of Police Chief Eric Grile during the Jan. 24 meeting of City Council.

Smith’s caretaker, his sister, Debbie, had reached out to the Division when her brother moved to the City’s west side. He sometimes has trouble finding his way home in the evening, she said.

“And that has happened,” said Chief Grile. “But what’s also happened is patrol officers have developed a relationship with him.”

Smith was nominated for the award by Sgt. Maggie Reed, who regularly sees Smith picking up trash during her evening work hours.

“Ron is always so happy and waves whenever he sees a cruiser,” said Reed. “He just puts me in the best mood every time I see him.”

Smith is credited with picking up trash “all day, every day” — no matter the weather.

As a child, Smith attended sporting events and couldn’t help but notice the amount of trash left behind by others.

“I decided when I got older, I was going to do something about it,” he explained.

It’s been a lifelong hobby for Smith. Not only does it help others, but it also gives Smith something he can do “all by himself,” said Debbie.

Chief Grile told Council members the world would be a better place if there were more people like Smith.

“This is an example of one resident making a big impact,” said Chief Grile. “It’s inspiring to see someone take so much pride in the community, and hopefully Ron’s actions will encourage others to find their own ways to make a difference.”