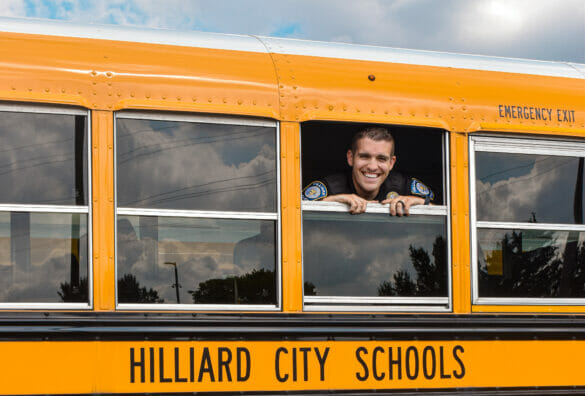 Two teenage boys sat on the hallway floor at Hilliard Davidson High School, sharing a tablet as they studied vocabulary words for an upcoming biology quiz.

“Hey, Officer Sam,” one called to the police officer walking toward them. “Want to ask us some questions?”

It was just another day on the job for Hilliard Division of Police Officer Sam DiSaia, who serves as a School Resource Officer in the building (though, admittedly, he is not an expert on biology definitions.) DiSaia had just finished ensuring doors were locked in the back of the school and securing the parking lot before the impromptu quiz session.

“I love talking to everyone,” he said. “And it’s easier to talk to people when you see them every day — especially young people.”

Walking through the hallways, he energetically rattled off various facts about the school, complimented the cafeteria staff and greeted each student. DiSaia estimated he knows most of the names of the more than 1,800 people in the building.

“The first two weeks the freshmen don’t talk to me, but I smile a lot and tell jokes, so they come around,” he added with a laugh.

“It’s more than patrolling the hallways. It’s about building the relationships with students who may need a caring adult as well as a professional police officer,” Chief Grile said. “Being embedded in each school building’s culture results in an overall safe and secure learning environment.”

Davidson High School Principal Joyce Brickley has been an administrator in the district for 20 years and has worked with several SROs throughout her career.

Brickley said she “couldn’t even fathom doing this job without a school resource officer,” praising the “knowledge, perspective, and calming effect” the officers bring each day to the learning environment.

“There’s this intuitive balance of knowing when to be proactive and reactive,” she said. “Officer Sam has a knack for connecting with students and understands that if the kids don’t think you care about them, they won’t listen to you.”

As the school day continued, DiSaia resolved a conflict between two other students, answered a legal question from a staff member, and directed traffic to allow buses to exit for their afternoon routes.

“I just talk to people all day long, and sometimes someone stops me with an issue,” he said. “I see my job as finding solutions.”